Terpenes are organic chemical compounds that naturally occur in the cannabis plant. They are found in the trichomes (tiny hairs protecting the outer layer of the plant) and give cannabis its distinctive smell and flavors. They are mostly associated with cannabis, but terpenes are found in other plants, including herbs like thyme and citrus fruits like lemons.

These organic compounds do much more than deliver a potent flavorful, aromatic experience when consuming cannabis. Research indicates that terpenes may be beneficial to treat wide-ranging health conditions, from epilepsy to malaria.

Terpenes are a class of hydrocarbon-based compounds that give cannabis its unique smell.

You will also see the term terpenoids used. Terpenoids are a class of terpenes but are modified chemically in some way to act differently when ingested. Usually, the terpene is oxidized, meaning combined with oxygen.

How Terpenes Affect the Body

When you consume cannabis, your body goes through various physiological responses. Some of these responses involve feelings of pleasure, while others induce sensations of sleepiness.

Terpenes play a role in how you feel when you consume cannabis. On the surface, cannabis terpenes are aromatic compounds that provide a sensory experience as you inhale and taste the plant. Far beneath the surface, terpenes act in unseen therapeutic ways to treat numerous diseases.

Difference Between Terpenes and Cannabinoids

Cannabinoids and terpenes have a complex relationship and are mutually necessary. Terpenes can control the amount of THC that crosses the blood-brain barrier (BBB). In fact, alongside cannabinoid ratios, terpenes will give you the best indication of what effect a particular cannabis product will likely have.

The primary difference between cannabinoids and terpenes is that cannabinoids do not influence scent and flavor, while terpenes strongly do.

Just as there are different strains of cannabis, there are also many different types of terpenes.

Most Common Terpenes in Cannabis

These are some of the most prominent terpenes found in cannabis.

Limonene is responsible for that “citrus” or “lemony” aroma and taste found in some strains. Limonene is found in fruit rinds, juniper berries, peppermint, and rosemary. Limonene can elevate the mood and provide stress relief.

When combined with other “sleepier” terpenes, Limonene can help aid sleep, and the effect becomes more energetic in higher doses and mixed with pinene, THC, and THCV. In this sense, terpenes and terpenoids can have biphasic effects, just like cannabinoids, i.e., the same compound can have different effects at different dosages.

Pinene (α-pinene) is why some cannabis varieties smell like pine trees. Pinene is also found in pine needles, dill, parsley, rosemary, and basil. Pinene’s effects include alertness, memory retention, and counteracting some of the adverse effects of THC.

Pinene is beneficial for people with asthma due to the terpene’s bronchodilator effects. Pinene also has antibacterial and antiseptic properties and could be used for superbug treatment and antibiotic resistance.

Myrcene (β-myrcene) is an antioxidant, anticarcinogenic, anti-inflammatory, and antidepressant. Myrcene is found in hops, mango, lemongrass, and thyme and can have sleepy effects. Myrcene may combine with THC and CBN to increase this drowsy effect. Myrcene also seems to target certain receptors, which may help contribute to cannabis’s anti-inflammatory effects.

Linalool is a terpene also found in lavender and jasmine, giving an air freshener-like smell. Linalool is beneficial for anxiety relief and sedation and has anticonvulsant, antidepressant, and anti-acne properties. Combined with THC, some CBD, CBN, and myrcene, you have a natural concoction that can be very useful for chronic pain and insomnia.

Earthy, woody, spicy aromas and flavors are usually associated with humulene and occur naturally in clove, basil, and hops. Humulene has antibacterial, antitumor, analgesic, and anti-inflammatory properties. Humulene may also combine with THCV and have appetite-suppressant effects.

Terpineol is a monoterpene alcohol found in pine, tea tree, cajuput, and petitgrain oil. Monoterpenes are a class of terpenes that consist of two isoprene units.  Terpineol has a lilac, floral, peach, or pine smell with a taste that has been described as fruity, minty, lime-like, or anise-like.

Terpineol can combine with other cannabinoids for anti-inflammatory effects and act as gastroprotective and kill bacteria. Terpineol can also integrate with CBD and CBDV for its anticonvulsant effects, useful for epilepsy.

Many terpenes in cannabis have a sweet, citrus, flowery smell, and bisabolol is one. Chamomile and candeia trees contain high quantities of bisabolol. Alpha-Bisabolol has anti-irritant, antitumor, antioxidant, antimicrobial, and analgesic properties.

Bisabolol can have a slight psychoactive effect and could combine with THC to produce more robust results. Bisabolol could be useful for reducing inflammation associated with skin problems.

Trans-nerolidol has antiparasitic, antifungal, and antimicrobial properties and could inhibit the growth of leishmaniasis (a disease caused by protozoan parasites spread by sandfly bites). Nerolidol has also exhibited strong antimalarial activity.

Scientists are studying other minor terpenes found in cannabis to understand their potential therapeutic uses. These minor terpenes occur less abundantly than the major terpenes and include:

These five minor terpenes only scratch the surface of the 100+ others naturally in cannabis. 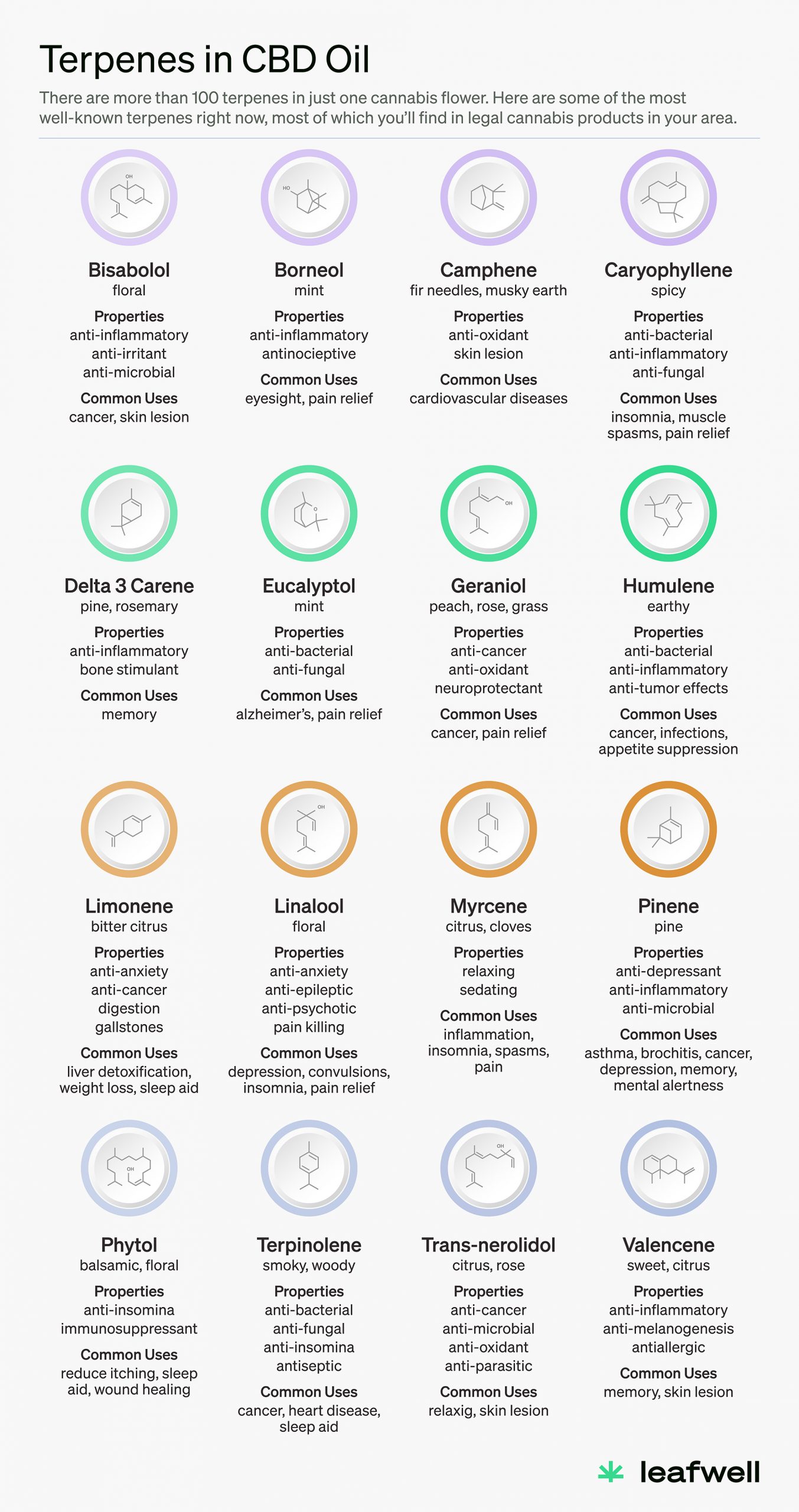 Some terpenes have been shown in scientific research to exhibit the following properties:

Each of these properties requires further research to reach definitive conclusions.

Terpenes may reduce general anxiety in people with mild to moderate stress in their lives. Smelling essential oils that contain terpenes is a common mood-enhancing practice in aromatherapy medicine. Breathing in a whiff of lavender oil, for example, is reputed to have calming effects, while inhaling a touch of sweet orange oil could give you an energetic lift.

Terpenes are used in many industrial products that we use every day:

Massage therapists and other natural healers also integrate terpenes into their work through aromatherapy oils and balms.

How to Maximize Benefits of Terpenes

Terpenes significantly impact how cannabis users feel and the effects medical marijuana has on a person’s symptoms and overall quality of life. Combining terpenes like limonene, pinene, and beta-caryophyllene with THC, CBD, and THCV can provide more energizing effects. In contrast, a combination of myrcene, humulene, and linalool would be more relaxing.

Therefore, understanding the individual properties of each terpene and then mixing and matching accordingly is a great way to maximize and synthesize the benefits.

Risks and Side Effects

If applied directly to the skin, terpenes can cause skin irritation or a rash. In addition, terpenes may be an irritant for the lungs or even toxic in some cases.

Do terpenes make you high?

Terpenes do not directly make you high but may have indirect psychoactive effects through their interaction with THC. In addition, some people may feel psychoactive or “heady” effects from the stimulating aromas of terpenes.

Are terpenes bad for you?

Some terpenes are toxic, while others will irritate your lungs if you inhale them in concentrated form. When used as an essential oil in a diffuser, terpenes are generally considered safe for people. However, many essential oils are toxic to pets. For example, pine oil (made from pinene) is toxic to cats and dogs.

Is it illegal to have terpenes?

Cannabis-derived terpenes are illegal on the federal level. In states where medical and/or recreational marijuana is legal, terpenes may be considered legal as well.

Apply for a medical marijuana card to legally experience the benefits of cannabis and its many terpenes. Reach out to one of the experienced doctors at Leafwell today, and we’ll meet with you in our virtual clinic.

Guide to Humulene: The Earthy Terpene Known for Its Medicinal Value

Humulene is a common terpene found in cannabis. It’s been used in Traditional Chinese Medicine and is shown to provide multiple health benefits.

Guide to Borneol, the Terpene Used as a Cold and Flu Remedy for Centuries

Borneol is one of the beneficial chemical compounds referred to as terpenes. With a minty camphor-type scent, Borneol has been used for thousands of years in…

Guide to Valencene, the Terpene That Smells Like Oranges

Learn about the citrus-smelling valencene and its uses, sources, and potential health benefits in our latest article.