Cannabis has long been thought of as not only a drug prone to abuse but one that could lead to the abuse of other, harder, more addictive substances such as cocaine and opiates. However, we are starting to see that medical cannabis is an ideal replacement for opioids and opiates when managing chronic pain, sedatives, and even alcohol.

Addiction refers to a psychological and/or physical inability to stop doing an action or consuming a chemical, drug, substance, or activity, even though it is causing significant mental and physical harm.

Dopamine, the body’s reward chemical, is linked to addiction. Habitual intake of drugs decreases the concentration of dopamine receptors expressed in the brain, reducing interest in activities that do not provide the same rewards or “dopamine hit.” Although addiction is often associated with drugs and alcohol, it can include activities like gambling, eating, or even exercise. 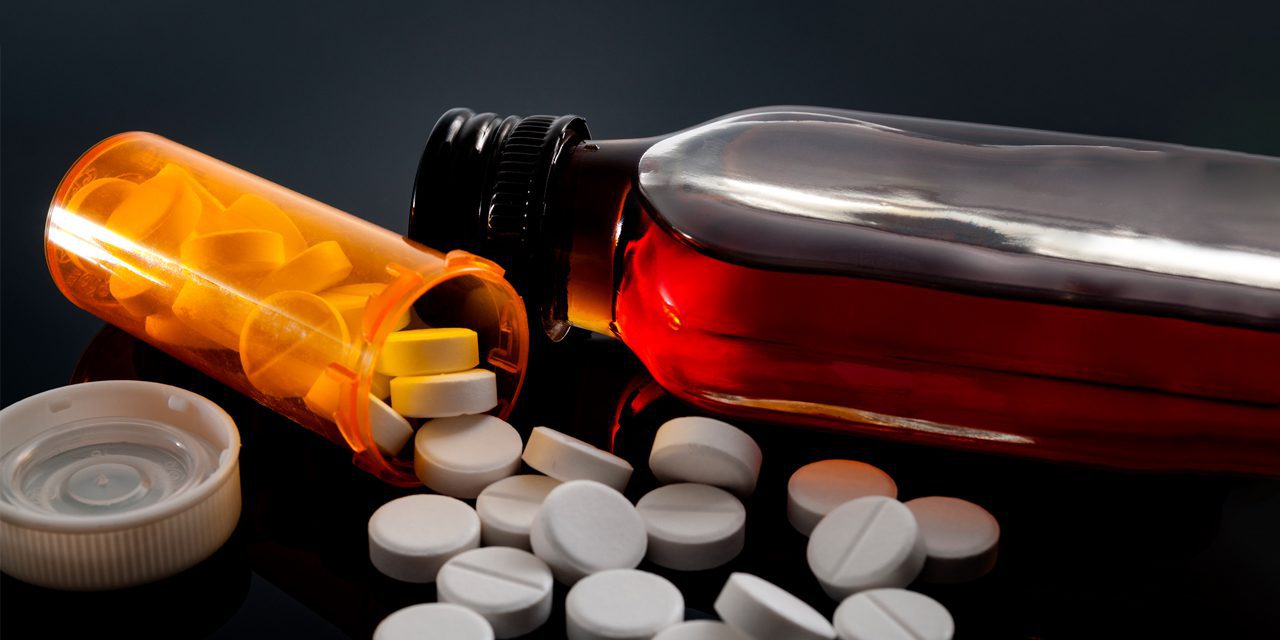 Using one substance to replace another is not uncommon in treating many types of drug addiction. Opiate and opioid addicts are often given opioid-based replacements (opioid substitution therapy), whereas for alcoholics, slowly weaning off of alcohol (“cold turkey” is dangerous in such instances) combined with benzodiazepines is usually recommended. This is to prevent the risk of relapse and, in the case of physical addiction, the more extreme side effects of sudden withdrawal and even death.

Other treatments include various modes of psychotherapy, including cognitive-behavioral therapy (CBT), psychodynamic therapy, and group therapy. There is a lot of interest in psychedelic therapy for battling various kinds of addiction, but this research is in its early stages. It is thought that serotonin receptor agonists could play a significant role in fighting drug addiction.

The case for using cannabis as an “exit drug” is intriguing. As cannabinoids can “talk” to and influence the behavior of other receptors in the body (including opioid receptors), they can theoretically reduce or replace the use of many drugs, whether licit or illicit. Another point for using cannabis for drug addiction is that, even if it is a crutch, it is a far safer crutch than opiates/opioids, alcohol, amphetamines, benzodiazepines, and barbiturates. Cannabis may also help ease nausea and vomiting, improve appetite and deal with any insomnia due to battling addiction.

Much depends on the type or class of drug one uses cannabis to help replace. As sudden alcohol withdrawal can cause death, cannabis can help reduce alcohol intake slowly and/or towards the end of treatment, when it is time to start minimizing the benzodiazepines often used to relieve alcohol withdrawal symptoms.

For opioid and opiate addiction, tapering opioid and opiate use slowly and, eventually, entirely with cannabis is possible. Slow tapering of opioids will also likely prevent the likelihood of any rebound effects. Theoretically, tapering combined with high doses of THC (also tapered down over time) may also help. Cannabidiol (CBD) may help ease anxiety and beat cravings, as serotonin-receptor agonists can help mediate addiction and repair addiction-related serotonin dysfunction to some extent.

There is less evidence for using cannabis to stop or reduce cocaine and amphetamine use, but there is some (sometimes conflicting) evidence. While ADHD patients may find cannabinoids more tolerable than their stimulant-based prescription drugs, this may differ for an amphetamine addict who does not have ADHD.

There is no objective, definitive evidence that cannabis is a “gateway drug.” There is perhaps one way cannabis could be a gateway drug, which is because it is currently federally illegal and therefore is traded along with other illicit substances, where the introduction to these heavier substances becomes more likely. Adolescents are at critical risk for substance abuse, and one of the substances could be cannabis, but it is not necessarily the primary “gateway drug.”

If we are logically consistent, it is worth considering: “To what extent are alcohol and tobacco gateway drugs?” Indeed, some people argue that if the concept of “gateway drugs” is real, then alcohol and tobacco are prime candidates, far stronger than cannabis. Again, this could be true theoretically speaking. After all, cannabis does not affect decision-making ability as alcohol does, and a person may be more susceptible to trying a more addictive substance when under the influence. This is more conjecture than empirically true, but this idea has an underlying logic.

There may also be a difference between those addicted to certain drugs for what may be termed “recreational” reasons (self-treatment for undiagnosed health problems is not uncommon) and those who use prescribed medications in a more controlled manner in a clinical setting. A different approach may be needed to treat these two groups. However, the two groups may overlap at some point (e.g., a prescription opioid addict starting to use non-prescription drugs to manage chronic pain).

There is much interest in other plant-based medications for addiction treatment, including kratom and psychedelics like ibogaine and psilocybin mushrooms! Many plants and fungi also have an entourage effect, which is sadly under-researched. Most research is based on small population samples or outside of standard clinical practices.

There is also concern about safety and efficacy regarding dosing and contraindications with other drugs/medications. For some, their condition (e.g., those with a history of psychosis) may not respond well to such treatments. Extensive integrative therapy is needed both before and afterward, as well as changes in the peer group and restricting access to recreational substances for such treatment to be truly effective.

There are also some potential similarities between cannabinoids and other powerful plant-based medications with regards to their effects, such as “cycle breaking” (or breaking the “loser script“) and a feeling of connection or oneness with nature, which one should not dismiss when it comes to breaking dependence cycles and conditions such as depression and anxiety.

Both THC and CBD may help, as well as THCV, THCA, CBG, and terpenes such as linalool, limonene, pinene, and beta-caryophyllene (considered a cannabinoid as well and may have anti-addictive properties).

Different dosages and cannabinoid ratios may be needed for addiction to other substances and stages of addiction. 3:1 THC:CBD or perhaps even higher proportions of THC to help with initial withdrawal and cravings, slowly tapering to 1:1 CBD:THC.

Terpenes such as linalool, limonene, pinene, and beta-caryophyllene (which is considered a cannabinoid as well and may have anti-addictive properties).

A combination of THC, CBD, beta-caryophyllene, and limonene may help treat addiction and replace or reduce the need for opioids/opiates, sedatives (particularly benzodiazepines), and alcohol.

What are the Pros and Cons of Taking Medical Cannabis for Addiction Treatment?

“Mark Wallace, MD (edited by Angie Drakulich): “[N]ew state policies have not led to any reported changes in marijuana dependence or abuse discharges in hospitals, but have resulted in a 23% reduction in opioid dependence/abuse discharges per a 2017 study (Shi Y, Drug and Alcohol Dependence, 2017). Another retrospective cross-sectional survey of patients with chronic pain using medical cannabis was associated with a 64% reduction in opioid use and decreased side effects, and improved quality of life, he shared (Boehnke et al., Journal of Pain, 17:739, 2016).

Some good-quality evidence suggests that cannabinoids may be used as an alternative to prescription painkillers, both opioid-based and non-opioid-based. There is also some evidence that access to cannabis reduces the rate of opioid prescriptions where medical marijuana is legal.

Using cannabis to treat addiction can depend very much on which drug the patient is addicted to. For those who are physically addicted to opiates/opioids, benzodiazepines, and/or alcohol, tapering is essential to prevent physical withdrawal (and post-acute withdrawal syndrome, or  PAWS). Once the physical dependence is manageable, cannabis may be used to taper down further and as a safer alternative to more physically addictive substances.

There is mixed evidence that cannabis may be useful for amphetamine and cocaine abuse. However, those using amphetamine-based medications for ADHD may find cannabis and cannabinoid-terpenoid-based drugs effective for reducing the intake of such prescription medications. Cannabinoids may be of greater value for treating central nervous system (CNS) depressants, such as alcohol, benzodiazepines, and opioids/opiates.

It is also important to remember that addiction is both a physical and psychological condition. It is just as essential to go through appropriate drug treatment programs, psychiatric help, and therapy (as well as changes in one’s environment and peer group) to prevent relapse. Without these adjunct therapies, the chances of recidivism increase dramatically.

Can I Take Cannabis to Replace Other Medications?

How Does Medical Cannabis Compare to Opioids for Treating/Managing Pain?

Note that the information in this article does not constitute medical advice.