Parkinson’s disease (PD) is a progressive neurodegenerative disease that causes muscular rigidity and stiffness, tremors, cramps, and slow, imprecise movement. PD affects primarily middle-aged and older adults, and PD is associated with a deficiency of the neurotransmitter dopamine and degeneration of the brain’s basal ganglia.

What is Parkinson’s Disease?

Involuntary shaking of body parts (tremors), slow movement, stiff and inflexible muscles, balance issues, sleeping problems, memory problems, and a loss of smell (anosmia) are all associated with Parkinson’s, which is a progressive neurological condition that causes an inability for the body to regulate itself properly. Parkinson’s disease is caused by a loss of nerve cells in the part of the brain named Substantia nigra, which reduces dopamine production in the brain.

As dopamine plays a vital role in regulating movement, dopamine precursors such as carbidopa and levodopa (L-DOPA) are often prescribed. There is no known cause of Parkinson’s disease, although genetic and environmental factors are implicated. Head injuries may also play a part in the development of Parkinson’s. There are around 1 million sufferers, and approximately 60,000 new cases of Parkinson’s are diagnosed each year in the United States. Parkinson’s usually starts to take effect in those aged 60 or older, although younger people can develop it, too. 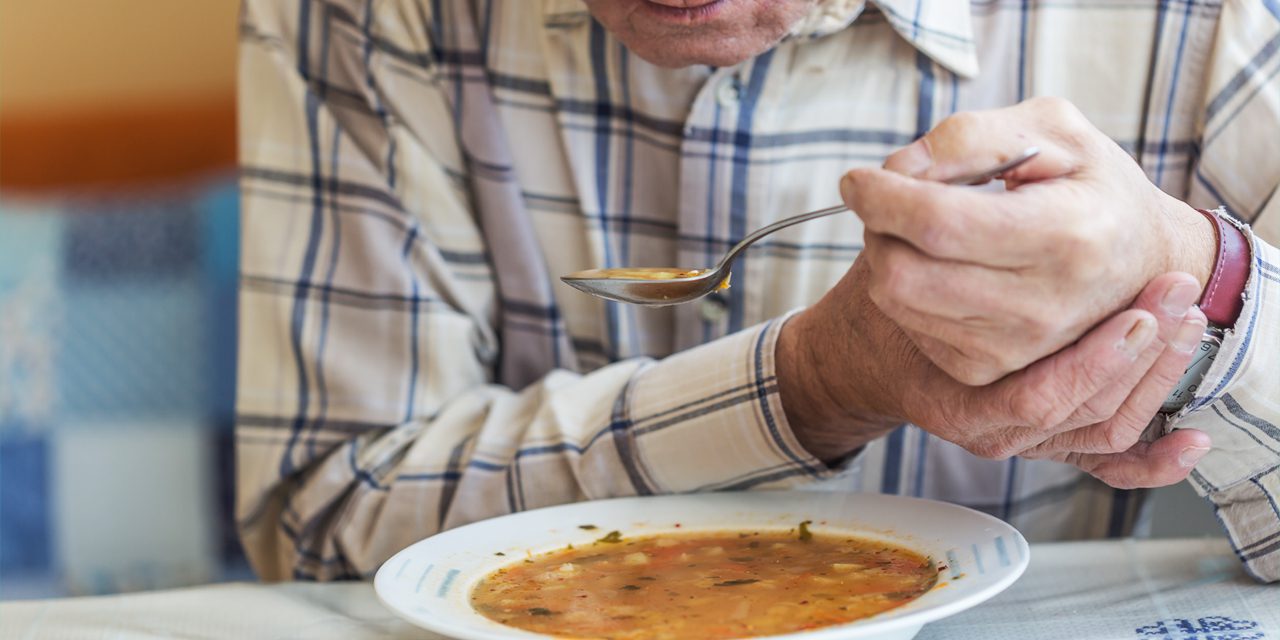 The main treatments for Parkinson’s disease include:

Cannabis may help with Parkinson’s, as THC and CBD increase dopamine production. Cannabis can also help prevent any shakes and relax stiff and inflexible muscles. Medical cannabis and CBD, in particular, may help reduce the need for antipsychotics as some prescription antipsychotics may worsen Parkinsonism. Unfortunately, due to the memory problems often present in those with Parkinson’s, care must be taken regarding THC in particular, although many patients report THC as beneficial.

Terpenes such as limonene, terpinene, pinene, octanol, linalool, beta-caryophyllene, myrcene, and humulene could also be helpful for their antioxidant and anti-inflammatory properties. Pinene may help overcome some of the adverse effects THC has on memory. Linalool, myrcene, and humulene have sedative effects.

People with Parkinson’s disease who eat more flavonoids in foods like berries, cocoa, and wine may have a lower mortality risk than those who do not. Cannflavins, quercetin, luteolin, and anthocyanins could be helpful for their anti-inflammatory and antioxidant properties.

Cannabis rich in CBD, beta-caryophyllene, and terpenes like myrcene, linalool, pinene, and humulene may be helpful. Some THC could also be beneficial, and some PD patients may prefer THC-rich cannabis.

What are the Pros and Cons of Taking Medical Cannabis for Parkinson’s Disease?

“There are concentrations of cannabinoid receptors in the basal ganglia area of the brain, where dopamine-producing neurons are located and which is known to be involved in the movement symptoms of Parkinson’s. Therefore, researchers have speculated that a substance such as cannabis, which binds with cannabinoid receptors in an area of the brain so closely involved in Parkinson’s, may positively affect the symptoms of the condition. Extensive research into this is underway.” Source: Cannabis (marijuana) and Parkinson’s, European Parkinson’s Disease Association (EPDA)

Man With Parkinson’s Takes Cannabis for the First Time

“Reduction of pain and muscle cramps was reported by more than 40% of cannabis users reported a reduction of pain and muscle cramps. Stiffness/akinesia, freezing, tremor, depression, anxiety, and restless legs syndrome subjectively improved for more than 20% and overall tolerability was good. Improvement of symptoms was reported by 54% of users applying oral CBD and 68% inhaling THC-containing cannabis. Compared to CBD intake, inhalation of THC was more frequently reported to reduce akinesia and stiffness (50.0% vs. 35.4%; p < 0.05)”

“Although observational studies establish subjective symptom alleviation and interest in MC among PD patients, there is insufficient evidence to support its integration into clinical practice for motor symptom treatment. This is primarily due to lack of good quality data.”

Much good quality evidence — including placebo-controlled trials, meta-analyses, and subjective reports — suggests that medical cannabis can help manage Parkinson’s. However, some meta-analyses indicate that, although promising, there is insufficient evidence to support the integration of medical cannabis into clinical practice for Parkinson’s. More research is needed.

Cannabis and Heart Health: At a Glance

Does Cannabis Affect Your Memory?

Please note: the information in this article does not constitute medical advice