Approximately 12 million adults have post-traumatic stress disorder (PTSD) in the United States, a condition in which a person has difficulty recovering after experiencing or witnessing a traumatic event. It is estimated that approximately 6 percent of adults will develop PTSD during their lifetime. This number sharply increases for military veterans and armed forces personnel: anywhere from 11-30% of veterans experience PTSD, depending on the conflict.

PTSD symptoms are often looped in with those of other anxiety and depression disorders, for which cannabis has proved a promising remedy. While research is only beginning to bud, scientists have discovered favorable evidence that cannabis helps soothe anxiety and other symptoms associated with PTSD. The FDA recently even granted the Multidisciplinary Association for Psychedelic Studies a grant to examine cannabis’ efficacy in treating veterans with PTSD.

This article covers what we know to date regarding the cannabis plant and its effectiveness in soothing PTSD and its symptoms and why patients with PTSD ought to consider medical cannabis as a tool on their path to wellness.

Many patients with PTSD have reported that cannabis helps manage and even eliminate their symptoms. All states include PTSD as a qualifying condition for medical marijuana use, given the widespread anecdotal evidence. PTSD is the only universal qualifying condition across all current medical cannabis programs in the US. In recent years, emerging research has unveiled more evidence explaining the mechanisms behind how cannabis helps with PTSD.

A recent study showed that cannabis users with PTSD not only saw increased reductions in their symptoms but were more than 2.5 times more likely to recover from their condition compared to those who didn’t use cannabis.

Per reviews of existing scientific studies, cannabis may help soothe the following symptoms of PTSD:

Individuals seeking cannabis to use in treating PTSD enjoy many different options for dosing and consuming cannabis.

One study suggests that cannabis can temporarily reduce the symptoms of PTSD and that inhaled cannabis smoke or vapor acutely reduced symptoms by more than 50%. This is likely connected to the deep breathing required to smoke or vaporize cannabis flower, as well as the instant bioavailability and effects of smoked or vaped flower.

Little additional research has covered other methods of cannabis ingestion. Edibles would likely provide longer-term relief for PTSD symptoms and probably serve as a valuable medicinal tool in lower doses. Tinctures deliver effects in the same way but more immediately.

As with any medicine, it’s essential to understand the potential side effects of cannabis use when using it to remedy PTSD and its symptoms.

May Increase Heart Rate and Anxiety

As PTSD is anxiety-related, correct dosing is of the utmost importance. Studies have shown that the wrong amount or cannabinoid combination can actually increase feelings of anxiety and raise heart rate, which is far from desirable amidst a PTSD episode.

To correctly dose, start with low amounts of THC and gradually increase the amount consumed to find the optimal level for your needs. Alternatively, consuming some CBD with THC will help mitigate the potentially anxiety-inducing effects of the latter.

Depersonalization is an altered state of identity and self-awareness that causes one to feel outside of their body or surroundings. Often linked as a PTSD symptom, people who consume cannabis may experience depersonalization, especially if they’ve experienced it before.

A common concern among veterans seeking to explore cannabis as a PTSD remedy is the fear of losing benefits from the U.S. Department of Veterans Affairs (VA). Luckily, the VA has stated that:

“Participation in state cannabis programs does not affect eligibility for VA care and services.”

The U.S. Department of Defense also takes a similar stance on cannabis substance use to treat PTSD. 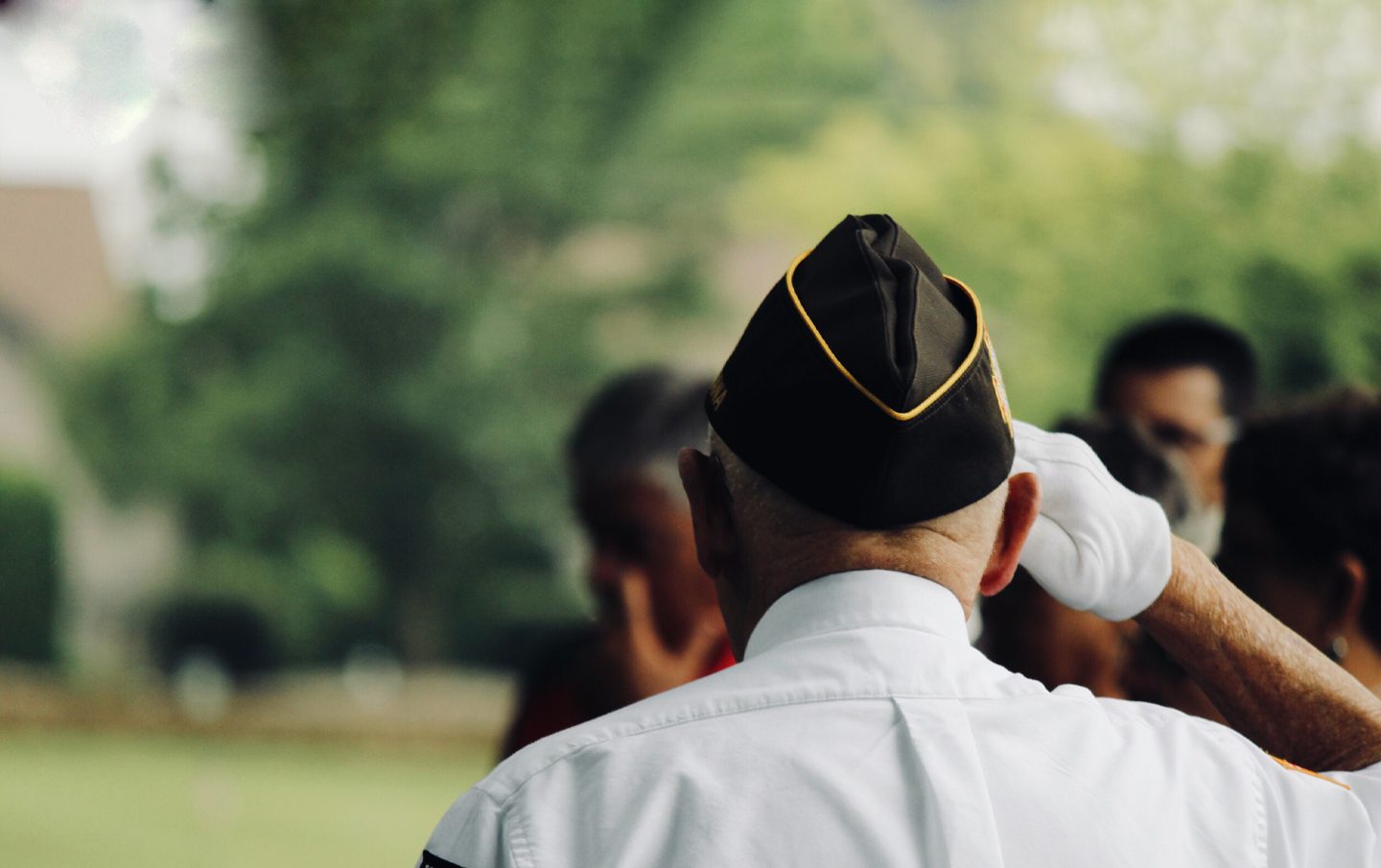 PTSD is difficult to treat because each individual requires unique care to address and overcome their specific traumatic memories. While traditional therapies exist, cannabis represents an alternative and potentially more practical option for existing treatment methodologies.

Many individuals with PTSD are prescribed medication to help their disorder, such as antidepressants like sertraline, or Zoloft. Sertraline is also used in other anxiety-related disorders, including panic disorder and social anxiety disorder.

Doctors may also prescribe sedatives like benzodiazepines such as Xanax or Valium on a short-term basis to soothe more heightened or erratic side effects. However, benzodiazepines are highly addictive: one study revealed that 17% of overall benzodiazepine use came from those abusing the drug.

Cannabis represents a safer, non-addictive alternative to each of the above medications.

A psychiatrist will often also recommend other non-medication treatments, such as proper sleep, nutrition, and exercise.

PTSD affects millions of people in the United States, and, thankfully, the increased legalization of medical cannabis has made access to its healing potential more available to those in need. While there’s a shortage of human studies on cannabis’ efficacy for PTSD, the current research points to promising treatments to alleviate its symptoms and provide a long-term solution with existing mental health therapies.

Curious how medical cannabis could potentially soothe your PTSD symptoms? Connect with a Leafwell physician to discuss your individual needs today.

Here are some answers to commonly asked questions surrounding cannabis use and PTSD.

What strain is best for PTSD?

In general, there are no best-fit strains to address specific medical conditions that work for all people with said condition. Instead, you should focus on the test results of cannabis products and seek specific cannabinoids and terpenes that have proven effective for PTSD and anxiety.

THC and CBN are both helpful in promoting restful, lasting sleep and addressing insomnia and nightmares related to PTSD. CBD also could be of use to boost low moods and reduce inflammatory symptoms.

What terpene is best for PTSD?

Limonene, bisabolol, myrcene, pinene, humulene, and beta-caryophyllene all may be helpful terpenes for soothing various PTSD symptoms, such as insomnia and inflammation. Linalool is also known for its stress-relieving properties, which can help with PTSD-related anxiety.

Cannabinoids like CBD work with broad strokes to empower the body’s endocannabinoid system and promote the regulation of many functions, including sleep, mood, and well-being. CBD may help those with PTSD mitigate traumatic memories’ influence over their day-to-day lives and allow them to regain wellness.

Cannabis for Veterans and PTSD: A Conversation With Balanced Veterans

Manage the symptoms of PTSD with medical marijuana. Discover the best cannabis strains for PTSD.