Cannabidiol, or CBD, is a cannabinoid found in the cannabis plant that has a range of potential health benefits, including stifling chronic pain symptoms, nausea, and more. How long it stays in your system depends on different factors. But, at a minimum, you can expect CBD to stay in your system for at least a day. If you’re a heavy user of the cannabinoid, however, it could hang around for up to or over a month with chronic use.

Before getting into the factors influencing CBD retention, it’s important first to understand what a half-life is. A half-life is the amount of time it takes the body to eliminate one-half of a substance, in this case, CBD.

CBD’s half-life typically ranges from an hour to five days. The body usually eliminates the presence of a drug between four to five half-lives. This means that CBD, on average, stays in the system from four hours to just under one month.

This rather large range is due to several factors. These include:

Each of these factors determines where within that range you’ll fall. Let’s break a few of these down in a bit more detail.

How Often You Use CBD

If you’ve used CBD only once or twice in low-to-moderate amounts and no other cannabis products, the cannabinoid will stay in your system for a few days and not more than 24 hours for most people. If CBD is used for a week or longer, it will be detectable in your system for a month or longer.

However, some people don’t feel the effects of CBD, at least right away. Some people need regular CBD ingestion for the medicine to have any long-term effects, and their bodies may need a baseline level of CBD to produce benefits.

For these people, regular consumption of CBD is necessary to experience benefits, which means the substance will be detectable in the body for a long time, perhaps several months.

How You Consume CBD

The different ways in which you consume cannabidiol matter as well. For example, vaping or smoking CBD flower is the quickest delivery method to feel the cannabinoid’s effects because the chemical immediately passes into the lungs and bloodstream. The effects tend to last one to two hours, sometimes three or four hours, after which effects tend to diminish. 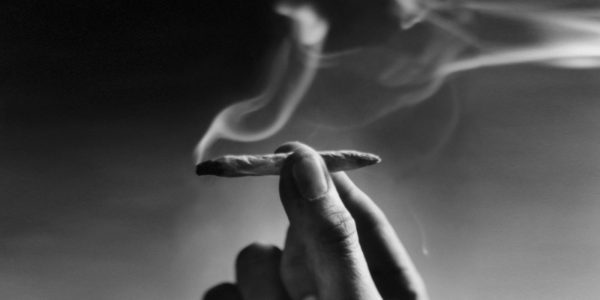 Other modes of consumption take longer to hit you, but they also last for longer periods:

If you use CBD on an empty stomach rather than after a meal or on a full stomach, the metabolic rate will be faster, meaning it will be processed by the body more quickly. Similarly, regular exercise users may find that their body metabolizes cannabinoids like CBD and THC faster.

This may be due to several factors, including the person’s overall body mass index. If their body composition comprises more muscle than fat, the body’s CBD levels may deplete more quickly as cannabinoids are stored in fat cells.

Many people have also reported psychoactive effects that mimic a more potent “runner’s high” version when exercising and using cannabis regularly. This sensation occurs because, once again, fat cells store cannabinoids. These cannabinoids are released when physical activity levels are increased.

CBD and Drug Testing: Does It Show Up?

It is unlikely but possible that CBD will appear on a drug test. If you consume CBD products frequently (multiple times per day), a drug screening (e.g., urine tests or blood tests) is more likely to return a false positive.

Further, CBD is more likely to be detected on a drug test if the product you use is full-spectrum, meaning it contains THC. (If you’re looking for CBD products that do not contain THC, try CBD isolate for a pure CBD product or broad-spectrum CBD for products that contain no THC but other cannabinoids, terpenes, and flavonoids.)

Can You Flush CBD Out of Your Body Faster?

There is no surefire way to eliminate CBD from your system in a hurry. However, some people drink herbal tea, bask in saunas, and engage in physical activity to flush CBD out of their systems more quickly. Whether these strategies work depends on various factors, including how much CBD you consume and how regularly, along with your overall body chemistry and metabolism.

Fortunately, CBD rarely causes a positive drug test. But, if you’re worried, stick to CBD isolate products as these only contain cannabidiol and not other cannabinoids like THC or compounds like terpenes or flavonoids.

Explore the world of CBD and other cannabis products with a medical marijuana card. Apply today through Leafwell, and our doctors will guide you every step of the way.