Cannflavins, which encompass cannflavin A, B, and C, are a group of chemical compounds known as prenylated flavonoids. They’re found in the Cannabis sativa plant and are an important secondary metabolite for the cannabis plant itself.

Cannflavins also have several predicted therapeutic properties due to their anti-inflammatory, anticancer, antioxidative, and neuroprotective agents. 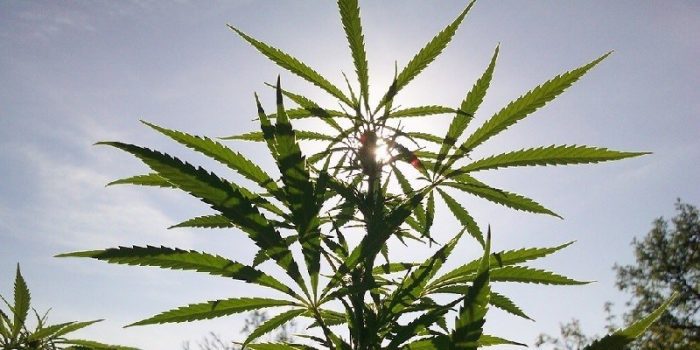 Cannflavins are unique as they are only found in the cannabis plant.

The three cannflavins discovered are a type of flavone, a subgroup of the wider flavonoid group found across the plant kingdom. Flavonoids are a group of natural plant chemicals known as polyphenols.

They are essential for plants as pigments, which give plants their color and have antioxidant properties. Because of this, flavonoids such as cannflavins are known as secondary metabolites, which means they’re advantageous to the plant but not essential for its survival, growth, and reproduction.

Also, all three cannflavins contribute to the medicinal versatility of the cannabis plant and can treat inflammatory disorders, cancers, and more.

How Cannflavins Work in Cannabis

The cannflavins are synthesized in the cannabis plant through a unique genetic biosynthetic pathway.

This pathway is seen as being a branch of the general flavone pathway. It involves using two enzymes, which ultimately transform one of the general plant flavones (found in cannabis and other plants) into the cannabis-specific flavone (cannflavin A or B).

These two enzymes modify the flavone structure through a methylation and prenylation reaction, enhancing cellular retention and access to various cell targets.

This suggests that scientists can design metabolic engineering strategies that they could use to produce these cannflavins. This would be helpful for medicinal use for two reasons: first, because cannflavins are restricted to the cannabis plant, and second, only a small amount of cannflavins can be extracted from the plant.

Another important feature of cannflavins in the cannabis plant is the entourage effect they are thought to contribute. The entourage effect describes how one component of cannabis, such as the flavonoids, interacts and works synergistically with other plant parts.

Currently, only limited evidence is available on the health benefits and medicinal uses of cannflavins in a clinical setting.

However, a scoping review of 26 studies based on original research has summarized what has been found so far in preclinical models. These results point toward the promising medicinal and therapeutic properties of cannflavins, highlighting their potential for clinical translation.

Animal cell models have shown that cannflavins, particularly cannflavins A and B, have potent anti-inflammatory activity.

It is thought that the anti-inflammatory activities of cannflavins could be harnessed and used as a natural pain reliever. This would be highly beneficial because cannflavins aren’t addictive, which could be an alternative to addictive pain relief medications like opioids and NSAIDs.

Isocannflavin B is an isomer of cannflavin B, which means it has a slightly different chemical structure but otherwise has very similar properties to cannflavin B.

A study showed that isocannflavin B was an effective immunotherapy agent in pancreatic cancer cell models. This effect was most significant when isocannflavin B was attached to a radiotherapy biomaterial (a traditional cancer treatment). The results were promising, with an increase in overall survival and a decrease in the size of both primary and secondary tumors.

Similar results were seen in a study of human breast cancer cells. Isocannflavin B suppressed the proliferation of these cancerous cells by arresting the cell cycle and increasing apoptosis (programmed cell death). It also delayed the progression of the primary and secondary tumors.

Cannflavins, particularly cannflavin A, may have neuroprotective effects against amyloid B fibrillation. Amyloid is a protein that can form plaques and contribute to Alzheimer’s Disease.

It’s important to note that this protective effect was only seen at low concentrations of cannflavin A, and at higher concentrations, it could cause neurotoxicity.

Although the evidence is less clear, the review also noted that:

It’s hoped that the neuroprotective, anti-inflammatory, and antioxidant properties of cannflavins mean that they could be used to treat many conditions, including various inflammatory disorders, cancers, Alzheimer’s disease, and infectious diseases.

What do cannflavins do for your body?

Although evidence from clinical trials in humans is still insufficient, preclinical evidence shows that cannflavins have several positive effects on the body. Most notably, as natural products, they don’t have the toxicity associated with traditional pain relief drugs and target inflammation at its source. They don’t have psychoactive components, so they’re ideal as painkillers.

Which foods and plants have cannflavins?

Cannflavins are unique to the C. Sativa plant due to the special biosynthetic pathway that’s thought to produce them. They’re primarily found in the leaves of the cannabis plant; however, they’ve also been isolated from sprouts obtained from the germination of cannabis seeds and hemp. Interestingly, some studies have found that cannflavin A has also been identified in Bigelow’s monkeyflower (Mimulus bigelovii) plant.

What are volatile sulfur compounds (VSCs)?

VSCs is a compound found in some varieties of cannabis that give the plant its characteristic “skunky” aroma. They are not flavonoids, but like cannflavin, there are VSCs unique to cannabis. The VSCs in cannabis are structurally similar to the ones found in garlic, and these have many potential health benefits, such as reducing the risk of heart attacks and supporting bone health.

Everything You Need to Know About Marijuana Strains

Marijuana strains are different varieties of cannabis with unique flavor and effect profiles. Learn everything to know to find the right strain for you.

How Do I Keep Cannabis Plants Healthy?

Discover how to keep your cannabis plants healthy plus download our free cannabis pest advice guide and our cannabis nutrients guide.