Will Medical Cannabis Play a Part in the Pharmacies of the Future?

There probably is not a better roundup of the current state of cannabis science and where it’s going than Ruth Fisher, Ph.D.’s “Transitioning to 21st Century Medicine: The Promise of Whole Plant Medicine” and “Cannabis: A Penicillin for the 21st Century.” So, instead of simply rehashing the same article, let’s get to the essentials of the argument that cannabis is not only the medicine of the future but potentially revolutionizing our understanding of the human body and healthcare in general.

We will start by quoting four of how Ruth Fisher believes cannabis commercialization will change healthcare and attendant technologies:

This article will discuss these concepts. We want to help you understand why cannabis science is so exciting and has a bigger impact on various industries than we might initially think. We here at Leafwell have often thought that our attitudes towards medical cannabis and plant medicine act as a microscope into how we look at how other medications work and how we get them approved.

How Cannabis is Changing Our Understanding of the Mammalian Body

The ECS is fundamental to homeostasis, “a self-regulating process by which biological systems maintain stability while adjusting to changing external conditions.” The ECS regulates food intake, memory formation, emotion, the sleep-wake cycle, fertility, pain sensation, and various activities involving the immune system (including inflammation). Everyone has their own unique ECS, with different concentrations of receptors in other parts of their bodies and different levels of endocannabinoid production and breakdown. This is referred to as “endocannabinoid tone.”

Dysregulation of the ECS causes a change in endocannabinoid tone, and/or a problem in endocannabinoid tone can create further dysregulation and make homeostasis impossible to achieve. When the ECS is dysregulated, stress and inflammation occur. This can trigger many health problems, from autoimmune diseases to depression,  insomnia, and neurological disorders like epilepsy, Alzheimer’s, and Parkinson’s.

Scientists have been looking for a “theory of everything” for disease, and one of the proposed theories is the “Inflammation Theory of Disease.” Both infectious and non-infectious diseases involve inflammation, and blocking inflammation can provide a form of treatment or therapy that can slow down, stop, or even reverse the progression of many diseases. As the ECS is so intimately linked to inflammation, and the cannabis plant contains so many anti-inflammatory cannabinoids (phytocannabinoids) that mimic the functions of anandamide and 2-AG, it is possible to use cannabis-derived cannabinoids to stem inflammation.

There is more to this story, however. One of the other exciting aspects of the ECS is that it acts as a kind of “supercomputer”, “routing system”, “air traffic controller,” or even “referee” between receptor systems. It is possible to use the ECS to “talk” to a broad range of receptor systems found in the body, including opioid, serotonin, dopamine, GABA, glutamate, and cortisol receptors, and influence how they behave. The ECS is a far older and less specialized receptor system than other receptor systems. Still, it is also, in many ways, a more fundamental system as it controls most of the functions necessary for the development and sustenance of life. Therefore, an ECS is essential for the development of mammalian life, as all animals on Earth have an ECS.

The standard drug pharmaceutical model is “one molecule, one target.” You synthesize and purify a compound and target just one receptor in the body. This allows you to control the effects of a drug and reduce the number of other variables that could change the drug’s efficacy. It also provides for a high degree of standardization and mass production. Unfortunately, this method of drug creation has one big drawback: it is very easy to overwhelm a receptor system by using a purified substance, which can lead to harmful side effects and even overdose.

One of the notable things about cannabis is that it is a “pharmacy in a plant.” Cannabis contains many compounds, including phytocannabinoids, terpenes, and flavonoids (terpenophenolic metabolites), that can influence the behavior of a wide variety of receptor systems as the ECS. Plus, the ECS breaks down these compounds very quickly, meaning that the chances of deadly overdose are more theoretical than practical. The compounds in cannabis can therefore be used to target multiple receptor systems, which can help reduce the need for other drugs like opioids, sedatives, and antidepressants, all of which can have more serious side effects than cannabis. Cannabis also has many anti-inflammatory compounds, targeting different kinds of inflammation.

Standardization is not necessarily a bad thing. As noted above, it allows us to determine the effect of a particular substance with greater safety and precision. However, there can be unintended consequences, and the safety profile diminishes.

The therapeutic power of cannabis and other botanical preparations lies within its variability. This is because if everyone has their own unique ECS, everyone needs a particular set of cannabinoids, terpenes, and flavonoids suited for their body and specific condition/s. Few pharmaceutical drugs can do this with any reliability or safety. Cannabis, however, can, and this variability might be one of the main reasons why:

Mimicking conventional pharmaceuticals through standardization may not be the optimal endpoint for cannabis, as the variability inherent in the cannabis plant is likely driving its ability to treat so many conditions.

Cannabis, Computing Power, and the Change from “Newtonian” Medicine to “Quantum” Medicine

To date, only two botanical drugs have been approved by the FDA: Veregen (sinecatechins derived from green tea catechins, used for treating genital warts) and Fulyzaq (crofelemer, used to treat non-infectious diarrhea in patients with HIV/AIDS on anti-retroviral therapy). The main problem with getting a botanical preparation approved by the FDA is:

Botanical drug clinical trial design is impeded by the limited number of approvals by FDA and European Medicines Agency (EMA). Thus, there is currently no consensus on conducting clinical trials for botanical drugs to accommodate the complexity of plant-derived mixtures where the mechanism of action may differ from that of a single molecule.

We do not have an appropriate methodology to test for the efficacy of a botanical preparation, as we cannot measure effects correctly due to their complex mechanism of action. Clinical trials are challenging to get approved, and the strong flavor of cannabis makes it difficult to carry out placebo-controlled trials.

But an increase in computing power, the ability to capture wider sets and types of data (wearables, questionnaires, social media, internet searches, electronic health records), and the ability for people to make purchases and review products online make it possible to determine what sort of effects botanical drugs like cannabis can have across a wide range of demographics. We may not have been able to test a botanical drug effectively before. Still, an increase in computing power and capacity allows us to collect vast sets of real-world data (RWD) and real-world evidence (RWE) that can help us break down what sort of outcomes a highly variable and complex product such as a plant has on a diverse set of populations.

Even though cannabis’ variability is part of its therapeutic potential, some form of standardization will be necessary to improve product safety and provide a dosing regimen for those suffering from serious health problems. To manage their insomnia, a non-medical cannabis user using a myrcene-rich cultivar (strain) may not need highly specialized dosing information and a specific chemical profile. On the other hand, a medical cannabis user with autism needs to know these things to prevent an adverse drug reaction (ADR).

The complexity of cannabis means cultivars can change dramatically over time and according to growing conditions. The Lemon Haze you might have bought from a dispensary in California is more than likely quite different from the Lemon Haze you purchased from a dispensary in Colorado. Even the same batch of cannabis can have variations in its chemical profile. This makes it difficult for patients to know what they’re getting, especially if they purchase from various producers and dispensaries.

As our data collection methods improve and testing requirements become standardized across different states, it will become easier and easier to start spotting batch variations and guiding patients to products with chemical profiles that match their needs. This can take a lot of the guesswork out of finding a suitable cannabis product and grow the plant towards greater acceptance as a medicinal and therapeutic agent.

There are several other advantages to cryptocurrency, including:

At the moment, cryptocurrency is risky, and there are few avenues for practical use. Cannabis, however, is one place where cryptocurrencies have massive potential for use as purchases can be made anywhere, anytime, across state lines. Suppose states do not legalize cannabis and create a system that allows for safe banking. In that case, there is no doubt that emergent technologies like blockchain will start taking over and providing examples of a real-world use for cryptocurrencies. This is already happening, to some extent, at least.

We may not think about several areas that cannabis touches immediately. Yet cannabis can impact our daily lives more than we might think. These include: 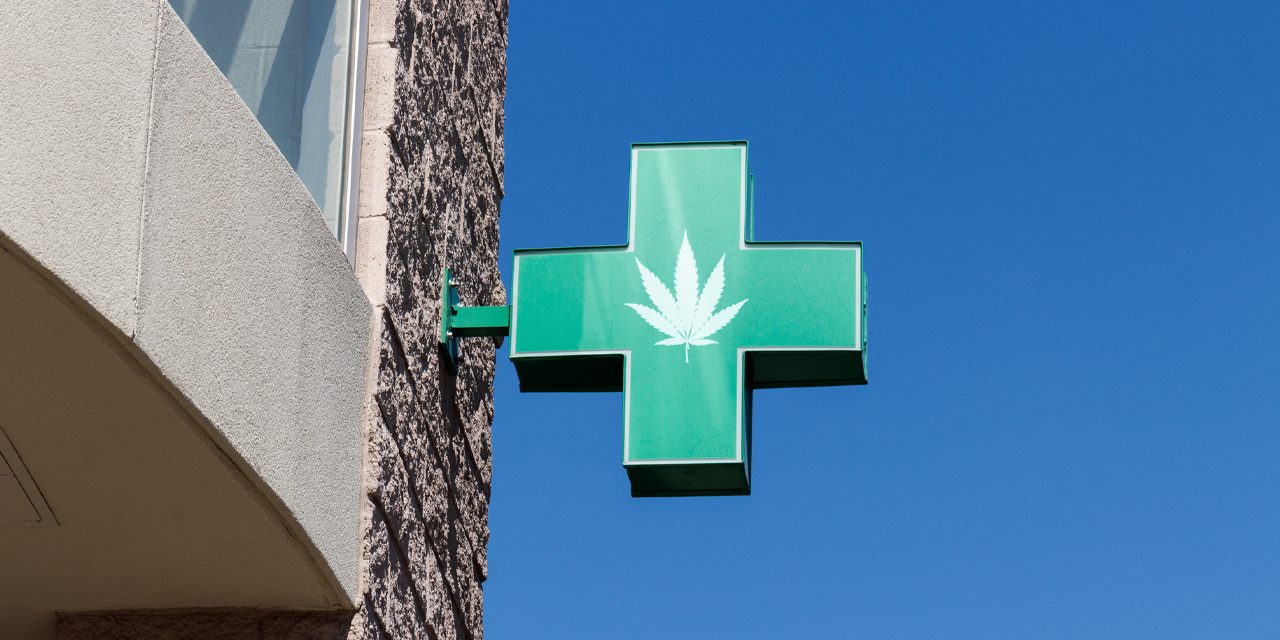 Will We See Cannabis in the Pharmaceuticals of the Future?

We may not see raw cannabis buds being sold in a pharmacy. Still, we may well see cannabis-based preparations like tinctures, transdermal patches, and inhalers in future pharmacies. This is because cannabis contains a plethora of anti-inflammatory cannabinoids, terpenes, and flavonoids that could effectively replace a number of prescription and over-the-counter (OTC) drugs while providing a much better safety profile. It would not be unusual to see cannabis-based preparations taking the place of opioids, sedatives, and antidepressants, but also ubiquitous non-steroidal anti-inflammatory drugs (NSAIDs) like ibuprofen and acetylsalicylic acid (Aspirin).

After all, if you can use a much cheaper, safer, and more tolerable drug compared to what’s available on the market today, then there is no doubt that cannabis will reduce or replace many other drugs found on the shelves of pharmacies. Furthermore, expect the medications available not just to be cannabis-based but based on other plants and fungi (e.g., St. John’s wort, echinacea, lion’s mane, psilocybin mushrooms).