Substance use disorder (SUD) is the persistent use of drugs despite negative outcomes, such as loss of income due to habitual intake, lost economic output, and severe social impacts (e.g., missed social events, isolation from family and friends). 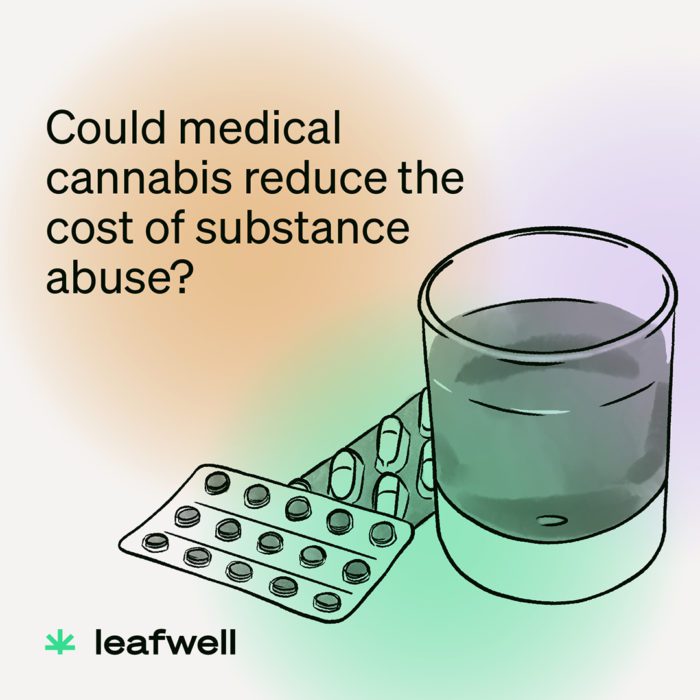 The costs associated with substance abuse are enormous.

Even conservative estimates suggest substance abuse costs over $600 billion annually. Other estimates put the costs much higher: over $1 trillion for opioid use disorder alone and $3.73 trillion if intangible costs are also counted. Such huge numbers include not only opioids but also licit and illicit substances such as alcohol (almost $250 billion), tobacco (over $600 billion), and prescription sedatives like benzodiazepines.

Whichever number one decides to go with, there is a clear need to reduce the costs associated with substance abuse disorder.

With an increasing number of states in the U.S. legalizing medical cannabis to some extent, and many patients reporting a decrease in their use of narcotics/opioids, anxiolytics/benzodiazepines, and antidepressants, a question arises: could medical cannabis help reduce the costs associated with substance abuse and addiction?

More research into this area, including the endocannabinoid system (ECS)‘s role in drug reinforcement and reduction behaviors, could also help us learn more about other addiction and addiction-like disorders, such as gambling and eating disorders like anorexia and obesity.

Again, the costs associated with such conditions are huge. Some consider obesity the biggest health problem in the U.S., with other metabolic disorders like hypertension and diabetes also increasing in incidence. So, learning about the biology behind substance abuse can help us learn about other pressing health problems.

Medical Cannabis Replacing Other Drugs? The Theory Behind Why (and Why Not)

The idea of using cannabis instead of other drugs is controversial, especially after years of cannabis’ reputation as a “gateway drug.”

The other common question is: “aren’t you just replacing one addiction for another?” The response to both of these ideas is that “cannabis could be seen as an exit drug” and that “cannabis is a safer crutch than many other drug replacements given during addiction treatment, especially as cannabis alone is unlikely to cause a deadly overdose.”

Before we come to any firm conclusion, we ought to look at the merits of both arguments. The picture is far more complicated than either argument gives credit for, and it could be said that both are true simultaneously. Medical cannabis can be helpful and ineffective, depending on the individual, the substance being replaced, and other comorbidities and socioeconomic factors. Here are some pros and cons for each.

Medical Cannabis for SUD and Addiction: the Pros

Targeting the ECS utilizing phytocannabinoids (plant cannabinoids) could help with several health problems that cause or are caused by endocannabinoid dysregulation or deficiency, i.e., the stress, inflammation, and immune system dysfunction associated when there is a problem with the production of the body’s natural cannabinoids, in particular anandamide and 2-AG. Addiction involves inflammation, as do common comorbidities like anxiety, ADHD and depression.

Drugs commonly prescribed for such conditions include opioids, benzodiazepines (sedatives), steroids, stimulants, gabapentin, and antidepressants, many of which have adverse side effects much worse than cannabis (e.g., addiction, overdose, brain fog, appetite problems, nausea/vomiting, GI upset).

There are several other key reasons medical cannabis may help reduce the need for other drugs. These include:

Medical Cannabis for SUD and Addiction: the Cons

The fact is, that cannabis use disorder (CUD) is an issue. Despite not being deadly on its own, cannabis use can become problematic and result in psychological addiction that can impair function. CUD is thought to affect approximately 9% of cannabis users, or even as high as 10%-20% of daily users or those who started using cannabis in their teenage years. Other potential cons include:

What Does the Research Show?

The research shows a greater number of positive results for some drug classes than for others. Medical cannabis could benefit drugs with sedative effects like opiates/opioids, alcohol, benzodiazepines, and barbiturates. Still, results are more mixed regarding drugs with stimulating effects like cocaine or amphetamines.

There may also be differences between those who are abusing or addicted to prescription drugs and those who are addicted to illicit, non-prescription drugs, where the psychology behind the use may be slightly different (i.e., one is using it for a specific medical purpose compared to someone using a drug purely for recreation, although these populations may overlap). 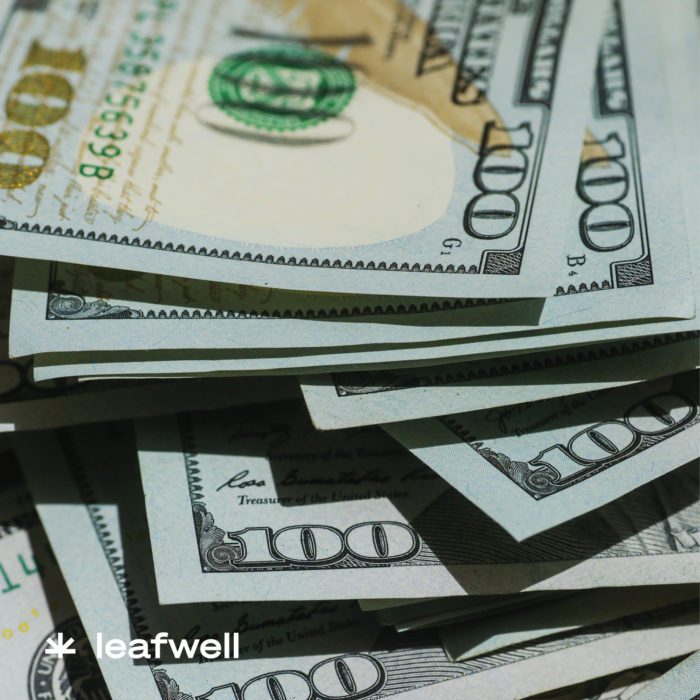 Assessing the Costs of Cannabis vs. Other Drugs

According to one study:

That is an estimated $4.4 billion yearly cost for hospitalizations due to cannabis/marijuana use disorder. The intangible health costs of CUD are more difficult to measure. Arguably, impacts like lost days at work or education, loss of connection with friends and family, and other quality of life measures are less severe with cannabis than other drugs. It is also arguable that, as cannabis can help improve function, reduce chronic pain, and does not cause death by overdose when used alone, the benefits outweigh the costs.

A good question someone might ask is this: if cannabis is improving one’s quality of life and helping reduce pain without the need for more addictive substances, is that not a high cost and healthcare burden saved on another budget sheet with a higher total itemized bill (i.e., alcohol, tobacco and/or opioid addiction)?

Moreover, some of the costs of hospitalization due to cannabis could be due to the black market conditions it is often sold in, where things like product safety, pollutants, and pesticides are not usually considered. Legalization could help reduce some of these costs further.

This includes an increased chance of psychosis in those susceptible to schizophrenia or bipolar disorder (although CBD may be useful for such conditions), stroke, or heart attack (although, again, there may be some uses here as well), or throat and lung diseases. Other costs, like traffic or workplace accidents, must be examined.

It would not be amiss to assume that the costs associated with some of these health problems may increase slightly if cannabis use becomes legalized and more widespread. One study also shows that smoking cannabis can reduce the short-term motivation to work for money, although the study’s testing method for workplace motivation (i.e., repeatedly pressing a key for a small amount of money) is questionable.

However, it is not wise to assume this will be the case. In the Netherlands, where cannabis is available to purchase quite easily (if not entirely legally), sales of medical cannabis decreased in 2020. Other studies suggest that cannabis is not a significant health problem in the Netherlands.

As for the motivation to earn money, it should be worth noting that many highly successful people productively utilize cannabis. Many factors could affect a cannabis user’s motivation to work, and it is not necessarily just the cannabis itself. Low pay, a lack of satisfaction in one’s job, and how peers treat one in the workplace are just a few of the factors that contribute to a lack of motivation.

The Cost of Alcohol Use Disorder (AUD)

The estimated cost of alcohol use disorder is $249 billion per year, which includes a healthcare cost of $28 billion, a workplace productivity cost of $179, vehicle collisions cost of $13 billion, and criminal justice cost of $25 billion. An estimated 95,000 people (approximately 68,000 men and 27,000 women) die from alcohol-related causes annually.

Some states with legalized recreational cannabis have shown a decrease in alcohol sales.

The Cost of Opioid Use Disorder (OUD)

The estimated cost of the opioid epidemic in 2017 was around $1.021 trillion, with the cost of OUD being approximately $471 billion, the cost of a fatal opioid overdose being roughly $550 billion, and the rest on other costs such as road accidents and lost workplace productivity. Over 75,000 people in the U.S. lost their lives due to opioid overdose between April 2020 and April 2021.

There is significant evidence that medical cannabis can help reduce the need for opioid-based painkillers, which can positively impact the number of people who die from an overdose of illicit and prescription painkillers. There is an association between a higher number of cannabis dispensaries and lower opioid-mortality rates in the U.S.

The Cost of Benzodiazepine Use Disorder (BUD)

In 2019, an estimated 739,000 people (0.3% of the U.S. population) met the tranquilizer use disorder criteria, including sedative drugs like benzodiazepines.

Now, while BUD does not lead to as many overdose deaths as opioids (about 7,000 people compared to over 75,000 people), a significantly higher number of people are managing benzodiazepine or tranquilizer use disorder. It is not unusual to find people using benzodiazepines like diazepam (Valium) or alprazolam (Xanax) to help “come down” from stimulant drugs like cocaine, amphetamines, or ecstasy/MDMA.

Long-term use of benzodiazepines has many negative outcomes and causes significant costs to healthcare and broader society. Benzodiazepines can also be quite an expensive class of drug to prescribe, especially when it comes to proprietary name brands.

One CBD-based medication, Epidiolex, is available on prescription. Many people have reported that medical cannabis helps reduce their anxiolytic (anti-anxiety) and sleep medications, which are benzodiazepine-based. This is because cannabis contains several sedative cannabinoids and terpenes (THC, high doses of CBD, CBN, myrcene, and humulene) that can help reduce the need for sedative medications.

The Cost of Tobacco Use Disorder

This includes nearly $170 billion in direct medical care for adults and over $156 billion in lost productivity due to premature death and exposure to secondhand smoke. Cigarette smoking and tobacco use are thought to cause more than 480,000 deaths annually, including deaths from secondhand smoke. Life expectancy for smokers is about 10 years lower than for non-smokers.

There is some evidence that CBD could be used to reduce a person’s pleasure from smoking cigarettes, but it is not known whether cannabis can impact tobacco sales.

Sadly, some evidence shows that cigarette sales rise in states with legalized adult-use cannabis, but this is not always the case. Careful dosing of medical cannabis and tinctures (e.g., CBD oils) may help reduce the desire for tobacco products.

The Cost of Stimulant and Cocaine Abuse

Amphetamine-type stimulants are the second-most illicit substance globally, after cannabis.

Although not as potent as opioids in terms of harm associated with use, stimulant addiction can cause a severe drop in the quality of life of individuals and prove to be highly destructive to society at large. Specific stimulant abuse-based costs are not easy to find, but they can be considered relatively high due to their abuse potential.

There is evidence that medical cannabis can help reduce the need for stimulant-based ADHD medications, with the terpene limonene showing particular promise in reducing methamphetamine intake.

Some other studies have shown similar results with different cannabinoids, where CBD can reduce cravings for stimulant drug intake. There is little data available on the effects of cannabis legalization on amphetamine or cocaine use. 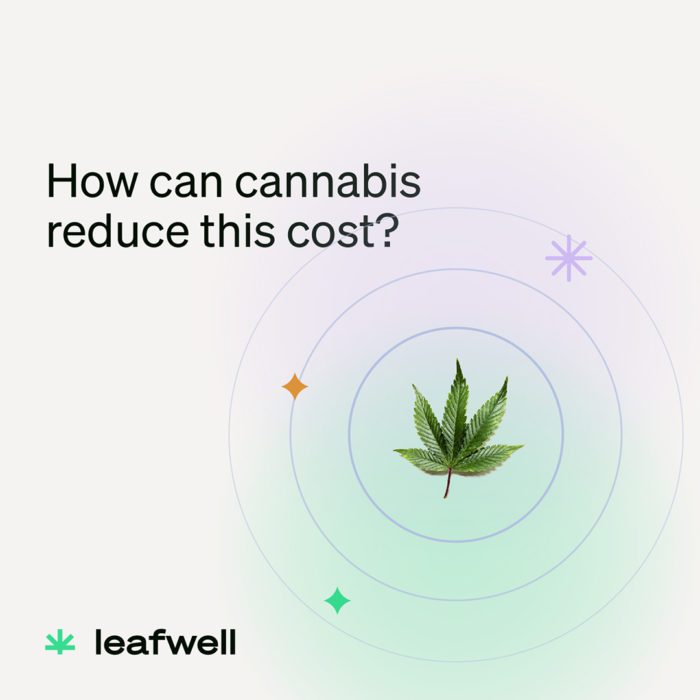 According to the data, the answer is a tentative “Yes.” Several studies have shown reduced opioid, alcohol, antidepressant, and sedative intake when medical cannabis is legalized.

There is some sound science backing the concept of cannabis as an exit drug. Many patients also prefer the effects medical cannabis has compared to prescription medications, many of which can have several harmful side effects.

However, the answer is a “tentative yes” as we do not know precisely how much money cannabis use disorder will cost society, especially in the long term.

On the whole, when considering the harms and adverse effects of cannabis compared to other drugs, it could be said that legalizing cannabis at least medically would increase the quality of life and reduce opioid and alcohol intake for a significant number of people.