Medical Cannabis and IBS and IBD

Although different in many ways, irritable bowel syndrome (IBS) and inflammatory bowel disease (IBD) have similar signs and symptoms, including abdominal pain, cramps, gastrointestinal tract upset, and problems with bowel movements. Medical cannabis use could help with both health problems by returning balance to the gut.

The two main forms of IBD are Crohn’s disease and ulcerative colitis, which are autoimmune disorders, and IBS is a functional gut disorder and is not a disease.

What is Irritable Bowel Syndrome (IBS)? What is Inflammatory Bowel Disease (IBD)?

IBS and inflammatory bowel disease (IBD) are often grouped due to the similarities in signs and symptoms. Still, IBS does not necessarily include inflammation (although this is arguable), and there is no corresponding increased risk for colon cancer or IBD.

There are several types of IBD resulting from a variety of genetic and other factors. The primary problems arise from the body’s immune system attacking its digestive system (as an autoimmune disorder, like in Crohn’s disease); a lack of biodiversity in the microbiome, or intestinal flora, which can make for a “leaky gut” (abnormal intestinal permeability) and provoke a harmful immune response; and disturbances of mood, like stress and anxiety. As IBD progresses, bleeding problems can occur, leading to extreme fatigue and vitamin deficiencies.

Those with an IBD are more likely to suffer from anemia, weight loss, or fever, and symptoms can become life-threatening. IBD is classified as a disease and is thought to be caused by a hyperactive immune system.

On the other hand, IBS is not a life-threatening condition and is thought to be caused by a dysfunction in communication between the brain and gut. Those with IBS may also have dysregulated serotonin levels, with IBS-C sufferers having too much serotonin, IBS-D too little, and IBS-M both too little and too much.

IBS and IBD overlap in symptoms. While treatments can be different, they can be similar. The idea that IBS does not involve inflammation is debatable. To quote from “The role of inflammation in irritable bowel syndrome (IBS)“:

“Inflammation may play a pathogenic role in IBS. Studies have highlighted the persistence of mucosal inflammation at the microscopic and molecular level in IBS, with increased recruitment of enteroendocrine cells. Substantial overlaps between IBS and inflammatory bowel disease have also been reported.” 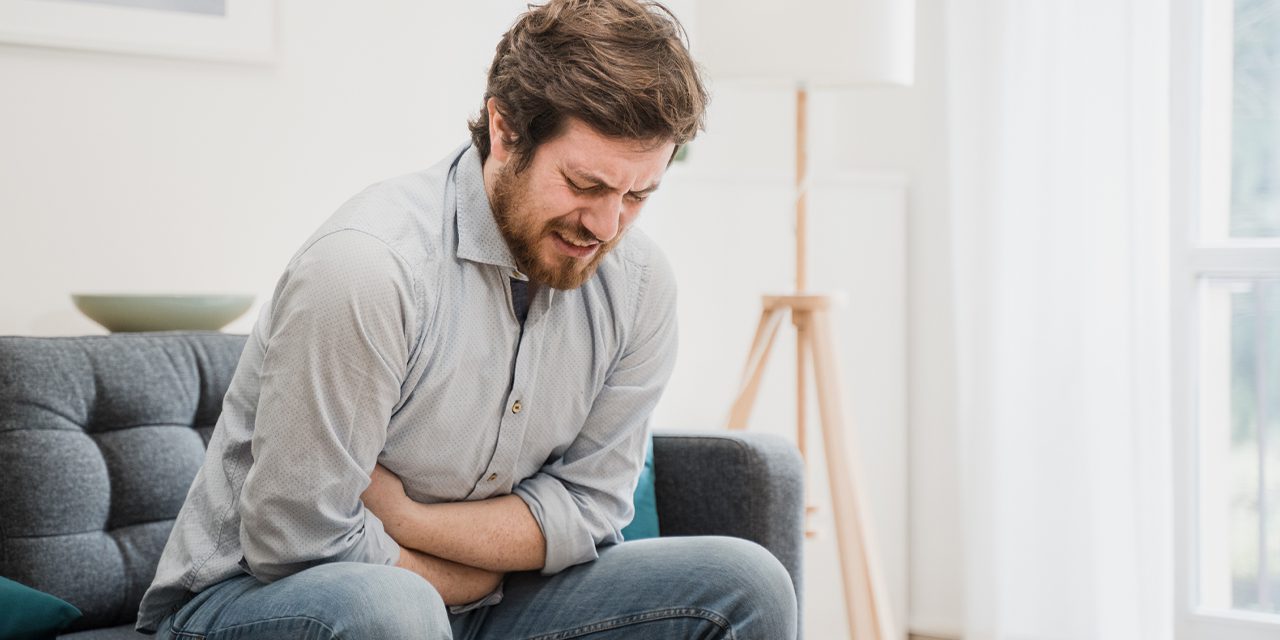 Lifestyle modifications and various medications can reduce the symptoms of certain types of IBS and IBD but, unfortunately, do not address its root cause. Changes in diet and proper exercise can help, and vitamin supplementation can sometimes provide a measure of relief. Loperamide (Imodium) may also be prescribed.

Doctors may also prescribe anti-inflammatory steroid drugs, whereas common consumer drugs such as ibuprofen are specifically not recommended. Other remedies may include anti-diarrheal medications (e.g., loperamide, aka Imodium), antibiotics, and immune system suppressants. Acetaminophen (Tylenol) can be used to control moderate pain; Interestingly, acetaminophen has been shown to work as an endogenous cannabinoid, binding to the same receptor as THC (CB1).

Those with IBD may be prescribed immunosuppressants (e.g., steroids or azathioprine), aminosalicylates or mesalazines, antibiotics, and other antibody-based treatments. These medications reduce inflammation and dampen an overactive immune system. Those with IBS are more likely to be prescribed or recommended medications like lubiprostone (Amitiza), linaclotide (Linzess), or bismuth subsalicylate (Kaopectate, Pepto-Bismol).

Many of those with ulcerative colitis or Crohn’s will need surgery to repair and remove damaged and inflamed parts of the intestine. The surgery can severely impact the quality of life.

Even if IBS and IBD are different in many ways, their similarities (i.e., inflammation and dysregulation of the gut) may mean there could be common treatments for both. Medical cannabis may be one such treatment.

The phytocannabinoids interact with ECS receptors in the gut that are present in great numbers. This activity directs digestive tract functions, particularly the modulation of intestinal inflammation.

In addition to the familiar phytocannabinoids CBD and THC, various other bioactive substances present in cannabis may contribute to its beneficial effects on IBD and IBS. Other cannabinoids – as well as additional healing molecules known as terpenes (e.g., beta-caryophyllene, myrcene, limonene, geraniol) and flavonoids (e.g., quercetin and the cannflavins) – demonstrate significant anti-inflammatory activity, and so may provide relief from IBD, IBS, and any associated stress and anxiety experienced by people living with these conditions.

Several scientists even suggest that phytocannabinoids overcome an “endocannabinoid deficiency,” meaning that our bodies need these compounds much like certain nutrients and vitamins. It has been proposed that many harmful actions of the immune system, like those seen in autoimmune conditions, result from a weakened or “underfed” endocannabinoid system. In this sense, phytocannabinoids may work by restoring balance to the ECS, reducing the pathological inflammation associated with IBD and IBS.

“Anandamide (AEA) and oleoylethanolamide (OEA) were increased in plasma of ulcerative colitis (UC) and Crohn’s disease (CD) patients, while 2-arachidonoylglycerol (2-AG) was elevated in patients with CD, but not UC. 2-AG, but not AEA, PEA and OEA, was elevated in CRC [colorectal cancer] patients.”

THC, CBD, CBG, CBC, and CBN may be useful for IBD and IBS.

There is little information or research into which specific THC:CBD ratios may be useful for managing IBD or IBS. Different people may require different cannabinoid ratios and concentrations.

The lack of regularity can be confusing when it comes to products sold at dispensaries or other licensed medical cannabis outlets, which can cause problems for patients. We keep it consistently THC:CBD in this article to avoid confusion.

Terpenes such as myrcene, beta-caryophyllene, limonene, and gingerol may be helpful for their anti-inflammatory and stress-busting effects.

Flavonoids like quercetin, cannflavin, and catechins (and many other polyphenols) “possess numerous anti-inflammatory and antioxidant effects, which help to improve the IBS symptoms and the QOL scores in the IBS patients [26, 36–45].”

Effective Ways of Taking Medical Cannabis for IBS and IBD

A CBD-rich formulation with plenty of beta-caryophyllene, limonene, linalool, myrcene, and pinene may help. Some THC may be useful, too, and can combine with CBD to enhance anti-inflammatory effects.

Inhaling phytocannabinoids via an inhaler or well-made vaporizer may be useful for rapidly addressing acute bouts of IBS or IBD symptoms.

For longer-lasting effects, tinctures and edibles/drinkables may be utilized.

Suppositories may be particularly useful as they can directly target the source of inflammation. Moreover, unlike inhalation and ingestion, suppositories do not produce the same level of psychoactive effects. This could be useful for those who are particularly sensitive to the effects of THC.

As with any treatment or medication, there can be undesirable effects and outcomes with some cannabis products used by medical marijuana patients.

For example, one smaller study showed concern about potential adverse effects on the pancreas with long-term use. The number of cases was insignificant (only 26 people), so it was uncertain whether cannabis factors were at fault.

Other potential adverse effects include:

What are the Pros and Cons of Taking Medical Cannabis for IBS and IBD?

They studied 46 people whose Crohn’s disease was moderately severe by randomly assigning them to two groups that received an 8-week treatment.

In one group, the treatment consisted of cannabis oil, comprising 4 percent tetrahydrocannabinol and 15 percent cannabidiol. The other group took a placebo.

The scientists used assessment tools that have been validated for research purposes to measure the quality of life and severity of symptoms. They assessed gut inflammation using endoscopic exams and markers in blood and stool samples.

After the treatment, there was a significant reduction in Crohn’s disease symptoms in the cannabis oil group compared with the placebo group.

The results showed that 65 percent of the cannabis oil group met “strict criteria for clinical remission” of Crohn’s disease, compared with only 35 percent of the placebo group.”

To make matters even more interesting, Crohn’s disease and type 1 diabetes share the involvement of a common gene: PTPN2, which is involved in regulating the immune system. Some types of arthritis are also associated with the PTPN2 gene as well. There are theories that variations (or, more scientifically, single nucleotide polymorphisms) of the NPSR1 gene are associated with varying types of IBS.

The enzyme fatty acid amide hydrolase (FAAH), which is responsible for breaking down anandamide (and THC), also seems to play a role in intestinal motility. This suggests that learning how to regulate the immune system via the ECS may be one way to help treat the underlying causes of various kinds of IBDs.

Could a polymorphism in a gene or set of genes that codes for the production of a particular endocannabinoid receptor be one cause of various autoimmune conditions, including Crohn’s, type-1 diabetes, and some kinds of arthritis? It’s a possibility.

Cannabis, Stress, and Inflammation: Targeting the ECS for a Range of Health Problems

Can Weed Cause Stomach Ulcers?

Please note that the information in this article does not constitute medical advice.