Here’s a handy table of the vast numbers of medically-beneficial compounds (in particular cannabinoids and terpenes or terpenoids) found in marijuana.

Cannabinoids and Terpenes in the Cannabis Plant 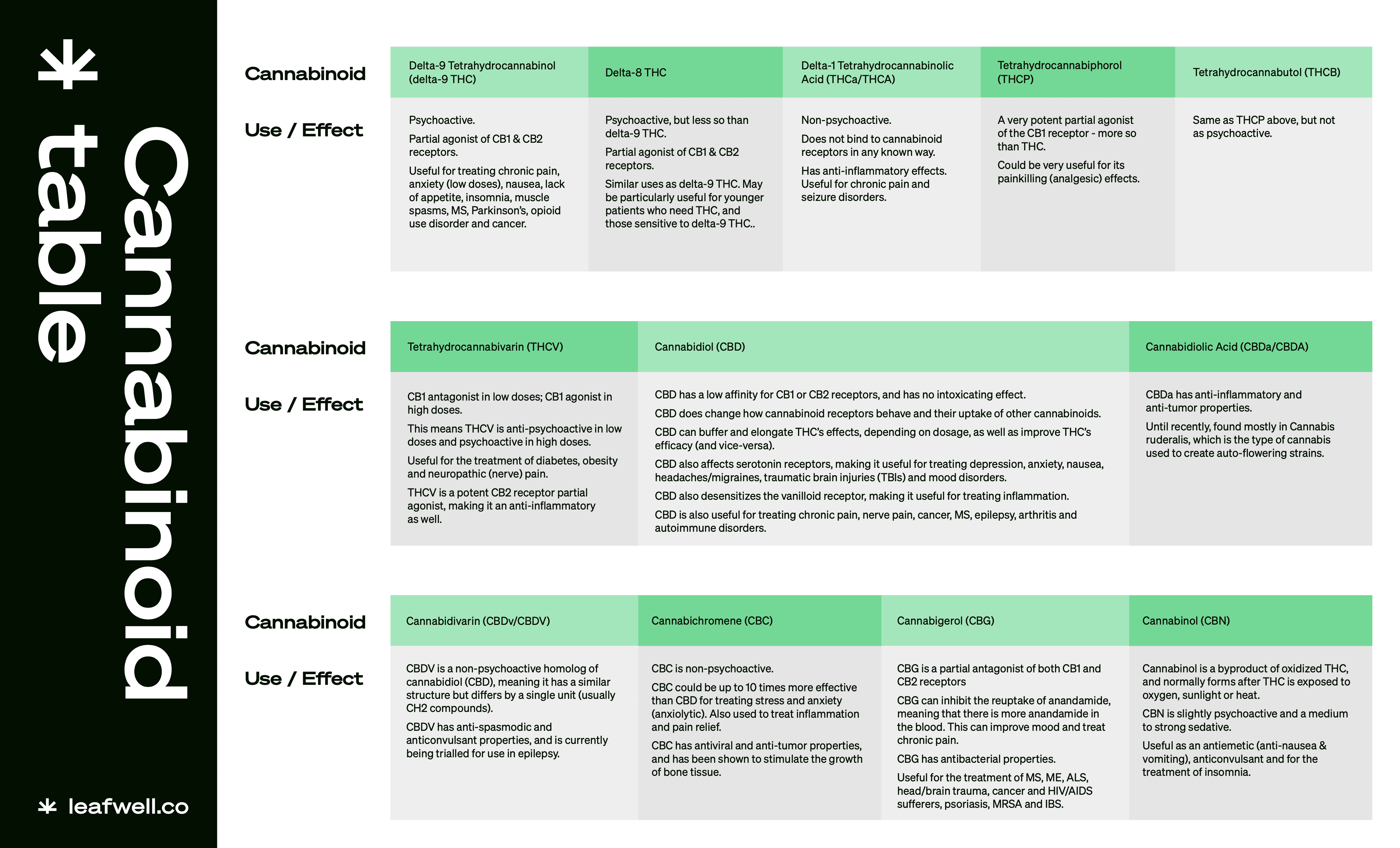 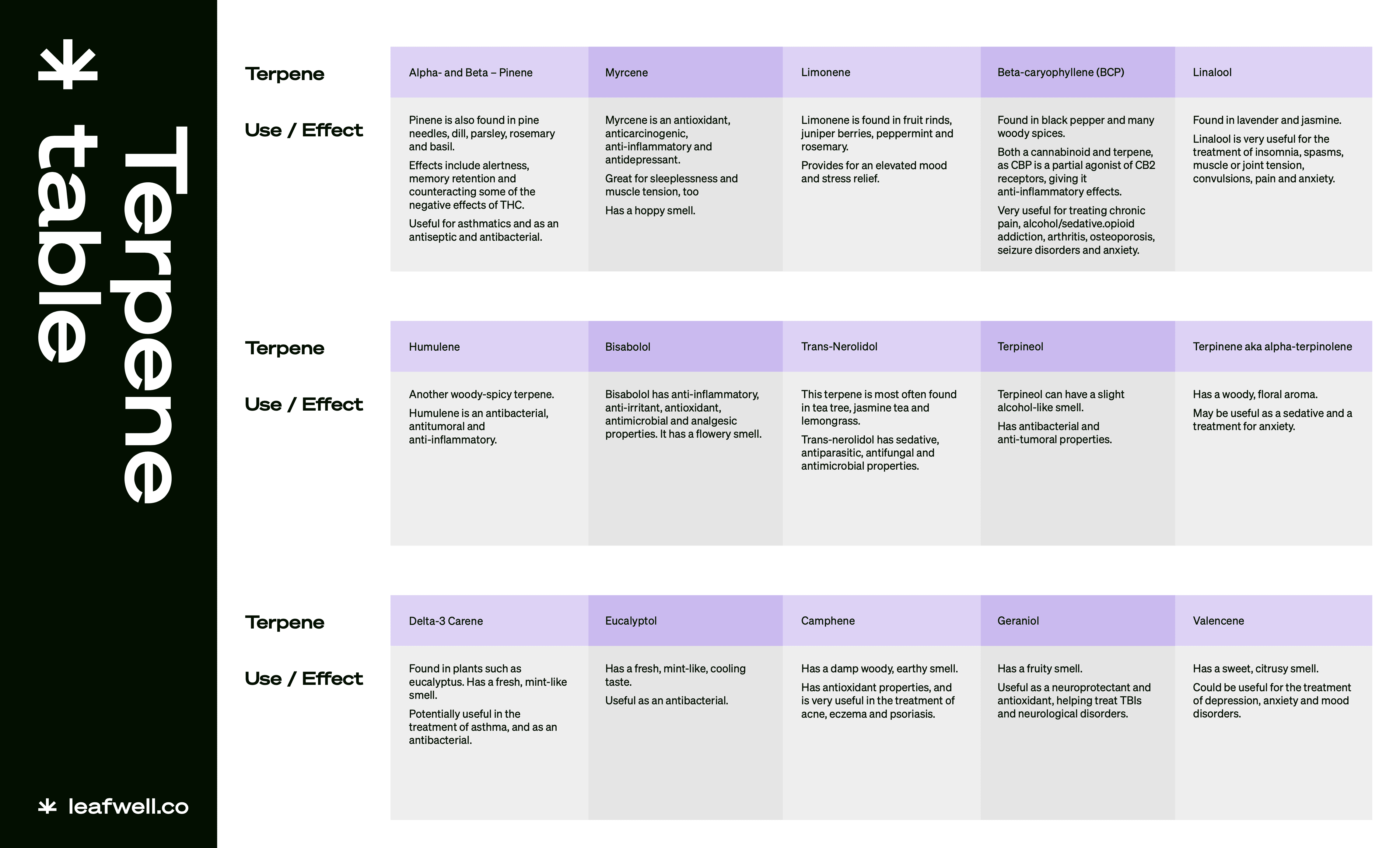 Please remember that concentrations of the above cannabinoids and terpenes vary not only from strain to strain but also from phenotype to phenotype, as some strains result in different types of marijuana. For example, growing 12 Super Silver Haze (50% Haze, 25% Skunk, 25% Northern Lights) seeds will likely lead to 6 Haze-dominant phenotypes and 3 Skunk- and 3 Northern Lights- dominant phenotypes, all with different concentrations of various cannabinoids and terpenes.

The grower’s skill, the environment the cannabis was grown in, the age of the cannabis, at what stage of flowering the flowering plant was harvested, and how well the marijuana flowers were dried and cured also affect a plant’s cannabinoid and terpene concentrations. The only way you’ll find out the best medicine for you is by seeing if you qualify for a Medical Marijuana Card with Leafwell and testing out some dispensary medications as soon as possible!

More research is needed to prove cannabis’s efficacy for many conditions, especially regarding the different cannabinoid and terpenoid profiles of particular strains, products, and extractions and how they can help (or hinder) treatment. You may still need other medications (cannabis is not an anti-rejection tablet for organs, for example, although CBD has shown some exciting results in this area as well!). In some instances, cannabis may interfere with existing conditions and medications. Always ask your primary care physician if you are unsure about anything!

Another issue is comorbidity. You may suffer from one condition that merits the use of cannabis and another where cannabis may not be as helpful, e.g., schizophrenia. However, there are studies taking place with CBD being a potential antipsychotic. However, where cannabinoid-based medications may prove beneficial is in reducing the number of other medicines needed, especially potentially dangerous and/or addictive ones such as opioids, benzodiazepines, and powerful non-steroidal anti-inflammatory drugs (NSAIDs). This potentially means less need to balance out a range of pharmaceutical drugs so that they do not react negatively with each other and the body.

Please remember that much of what we write is theory and supposition. For many of these conditions, the efficacy of cannabis has not yet been proven beyond doubt — a fact exacerbated by the fact that there are not a considerable number of properly-controlled studies out there. Hopefully, this will change in the future. The federal government takes a more neutral, objective, and, perhaps most importantly, scientific stance on cannabis and research into cannabinoid-based medications.

If you need to know more about dosing on medical marijuana, check out our guide. In the meantime, here’s a quick look at using medical marijuana and utilizing these cannabinoids and terpenes in context.

10 Things to Consider About Dosing Cannabis