The reason why you get the munchies when you use cannabis isn’t a question that’s easily answered. It comes about through a complex interaction between the body’s natural endocannabinoid system (ECS) and the exogenous cannabinoids like THC.

Anyone who’s had the munchies knows how powerful the experience can be, from the cravings to the flavors and the all-encompassing enjoyment you get from smashing salty and sugary snacks. Luckily, as cannabis research expands, we are starting to understand the connection between cannabis and hunger better.

We may feel hunger in the gut, but it’s controlled in the brain. Many complex chemical signals are wired back and forth between your brain and body. It all starts in the hypothalamus, which regulates the chemical signals that activate when you smell, taste, and see. Just thinking about food excites and activates the neurotransmitters in your brain associated with food. There are two sets of neurons in the hypothalamus: those promoting hunger and those suppressing it.

Hormones are also involved in the hunger process, and they’re released when food breaks down during the digestion process. Protein breaks down into amino acids, fat down to fatty acids, and carbohydratesdown to glucose. This process regulates hormone production and tells the brain when you’re full or need more fuel. Ghrelin and leptin are two hormones that circulate through the blood and communicate with hunger generating and suppressing neurons produced in the hypothalamus.

When your blood sugar level drops and you get hungry, ghrelin increases in the blood, which stimulates the hunger-promoting neurons in the hypothalamus. When you feel full, leptin levels increase in the blood and stimulate the hunger-suppressing neuron in the hypothalamus. So when ghrelin levels are high, you feel hungry, and when leptin levels are high, you feel satiated and stop eating.

The reason why cannabis is so effective at hijacking your hunger pangs is because of the way cannabis interacts with the body’s natural systems that operate the hunger experience. In experiments with fasted mice, the endocannabinoid system uses the olfactory system to increase food intake by increasing odor detection.

THC binds with CB1 receptors in the brain’s olfactory bulb for hunger specifically, which makes food smell and taste better.

A team of neuroscientists led by Edgar Soria-Gómez and Giovanni Marsicano was able to show this in a study with mice. The mice exposed to THC were much more attracted to smelly banana and almond oils than mice who hadn’t ingested THC. The scientists discovered that when these mice were fasted and became hungry, their olfactory bulb produced endocannabinoids. This means that mice who are naturally hungry and mice who have their appetite stimulated by THC are being persuaded by the same biological functions.

THC replicates the natural feeling of hunger and effectively because ECS is already involved in the hunger process. In short, THC doesn’t necessarily make you hungry. Still, it stimulates the olfactory bulb in the brain and exceedingly increases the positive sensations from eating sweet and salty snacks. This is a necessary clarification because the same experiment was repeated with genetically engineered mice with no cannabinoid receptors. When they were given THC, there was no increase in their appetite or their sense of smell.

THC also prevents you from feeling full by hindering the chemical signals that tell the brain you’re full. These hypothalamic pro-opiomelanocortin (POMC) neurons signal that the stomach is full, and THC suppresses these chemical signals from communicating to the brain.THC makes food smell and taste better and makes you feel less full, making it even harder to curb a snack attack. 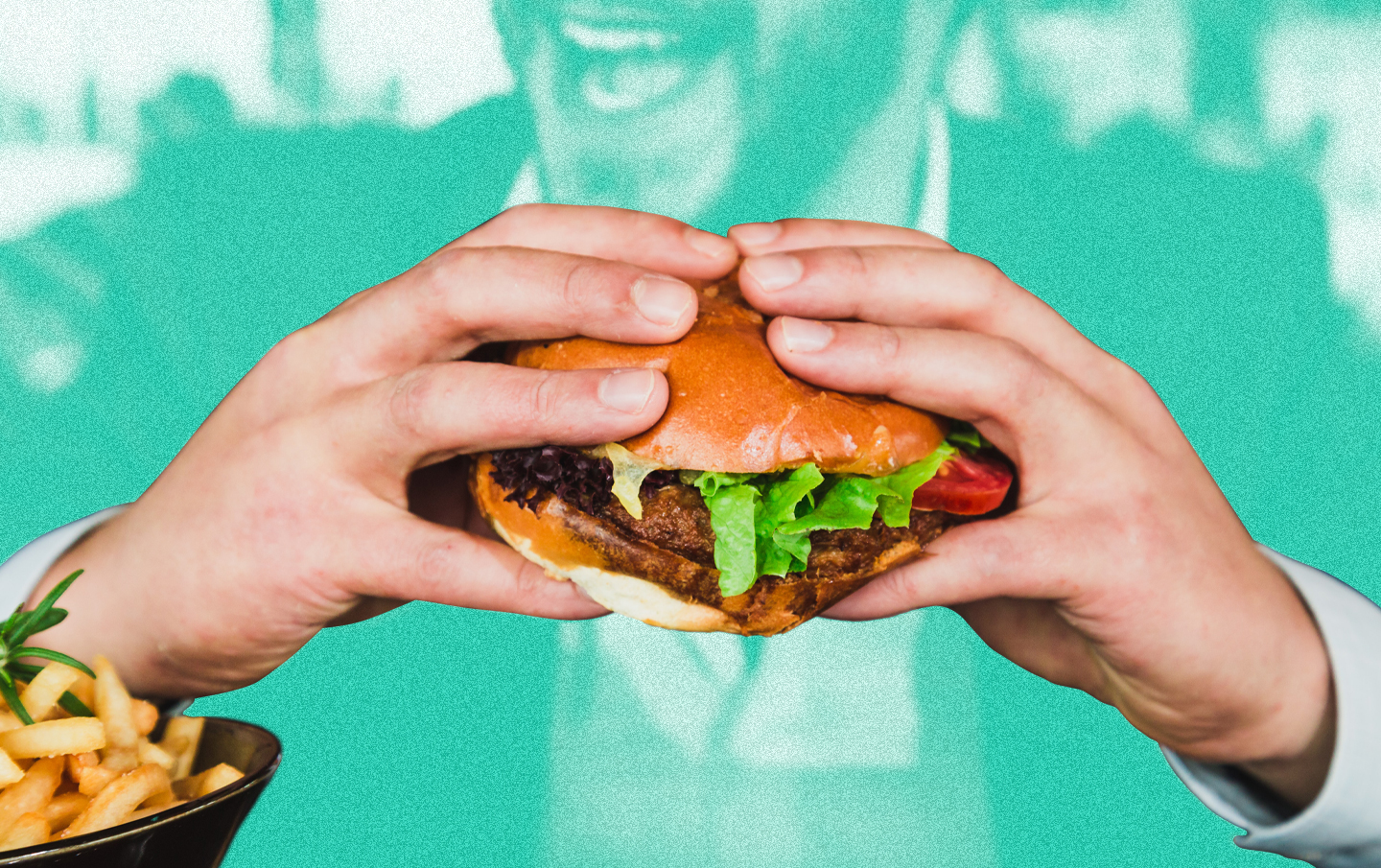 The chemical mechanisms at play here are incredibly complex, but what’s simple is that if you smoke, you will more than likely feel hungry. There is a connection between the amount of THC you consume and how hungry you get. THC is a chemical trickster that cons your brain by making food seem irresistible when it comes to hunger.

However, many people who smoke cannabis don’t want to gain weight because of their munchy habits. Common sense might suggest that regular cannabis users get the munchies all the time, which leads to unwanted weight gain, but that isn’t necessarily true. A three-year study from the NCBI found an inverse relationship between cannabis use and obesity and cannabis-body mass index (BMI) increase association.

The NCBI also provides an abundance of data breaking down and discussing all of the proposed theories as to why the rate of obesity tends to be lower in cannabis users compared to nonusers. One of the main reasons given is that cannabinoids like CBD can help regulate insulin levels. The data show that cannabis can be an effective weight-loss tool compared to other pharmaceutical or surgical methods. It also helps protect users against obesity-related chronic illnesses and reduce deaths related to pharmaceutical-related overdose.

What to Eat When You Have the Munchies

So if you’re a regular cannabis user and the munchies are inevitably going to creep up on you, there are ways to mitigate the intense cravings for sweet and salty food. One way is to meal prep around your smoking routine – this way, you have a delicious and healthy meal waiting for you when the pizza cravings set in while watching that Dominos commercial for the third time.

Knowing that your cravings will likely center around sweet and salty flavors can give you some clues on the kinds of healthy snacks to keep on hand. Trail mix is great because you get a great blend of sweet and salty flavors while avoiding heavily processed things. Nuts are great for satiating a snack attack because they’re full of nourishing fatty acids.

Another excellent option for munchy food prep are burrito bowls, rice bowls, and wraps. These are incredibly filling options with versatile recipes and can be manipulated to satisfy an array of dietary needs. Combinations of beautifully seasoned beans, rice, veggies, and protein provide the body with a nourishing alternative to any boxed junk food you’re going to find in the grocery store.

Why Does Smoking Cannabis Make You Hungry?

In short, THC plays tricks with your regular hunger signals and makes food seem more irresistible by making it smell and taste better as well as making you feel less full.

While having uncontrollable eating habits can lead to obesity, a complex set of data shows regular cannabis users are much less likely to suffer from obesity and obesity-related chronic illnesses.

What Are The Best Foods To Eat While I Have The Munchies?

When you eat good food, you feel good. Prepping healthy and nourishing foods that can satiate your salt and sweet cravings. Anything from trail mix to rice bowls and balanced home-cooked meals will not only satisfy your munchies, but help mitigate the guilt or negative physical feelings and mental emotions that come with binging junk food.

Are there any cannabinoids that can curb appetite?

Yes. Low doses of the cannabinoid tetrahydrocannabivarin (THCV) can curb appetite and reduce hunger, a CB1 receptor antagonist. CBD and CBG, which are negative allosteric modulators of CB1 receptors, can also curb hunger to some extent. The terpenes limonene and humulene may also curb appetite.

The endocannabinoid system (ECS) plays an important role in inflammation of the gut and its microbiome. Learn more about this fascinating area of science!

How to Make Vegan Edibles

Ready to make delicious vegan edibles? Get recipes to help you cook vegan edibles with cannabis, including dosing tips, preparation, and more.

Marijuana Detox: What They Are and What to Expect

A marijuana detox is an attempt to eliminate all traces of cannabis and THC from the body and is done for various reasons (high tolerance, drug tests, etc.).