Cannabis is a wonderfully complex medicinal plant full of hundreds of chemicals that contribute to its aroma, flavor, and effects.

Beta-caryophyllene (BCP), also known as the “pepper terpene,” is a chemical responsible for cannabis strains with a warm, woody, and spicy aroma similar to black pepper and cloves. But beta-caryophyllene is more complex than other terpenes and bridges cannabinoids and other compounds in the cannabis plant. It has anti-inflammatory effects, and could be useful for a range of conditions like arthritis and nerve pain.

This article looks at what makes beta-caryophyllene special, how it affects the body, and for which conditions it may be a helpful treatment.

Why Is Beta-Caryophyllene Considered a Terpene and a Cannabinoid?

Beta-caryophyllene, sometimes called caryophyllene, is a terpene with a warm, woody, spicy smell. It’s in black pepper and clove oil, as well as rosemary, oregano, cinnamon, basil, black caraway, hops, and essential oils. Beta-caryophyllene is so distinct that it’s the smell drug-sniffing dogs are trained to sniff out.

Terpenes influence how cannabinoids behave and can modify how much THC crosses the blood-brain barrier (BBB). Terpenes can also regulate the production and decomposition of neurotransmitters like dopamine and serotonin.

Terpenes like beta-caryophyllene also affect flavor and combine with flavonoids and cannabinoids to produce unique therapeutic effects (the entourage effect). While different terpenes and cannabinoids have other effects at different dosages in various combinations, it is essential to remember that they are all interlinked.

Research studies have implicated beta-caryophyllene as a valuable potential remedy for many medical conditions, including the following:

Dopamine neurons contain CB2 receptors, and therefore blocking or deleting these receptors can modulate anxiety-like behaviors. This is because, under inflammatory conditions, CB2 receptor expression in the brain is enhanced. This means selective CB2 agonists like beta-caryophyllene are beneficial for treating anxiety.

The overexpression of CB2 cannabinoid receptors is also implicated in other neuropsychiatric disorders like depression and schizophrenia. Eating disorders and alcohol-seeking behavior are also altered by CB2 receptor overexpression on dopamine neurons. Since beta-caryophyllene is a CB2 agonist, this can help mitigate depressive moods and other neuropsychiatric conditions.

Beta-caryophyllene’s anti-anxiety, antidepressant, and anti-inflammatory properties make it potentially very useful for treating chronic and neuropathic pain. Beta-caryophyllene has been shown to have analgesic as well as anticancer effects.

Powerful non-steroidal anti-inflammatory drugs (NSAIDs) like celecoxib (brand name: Celebrex) are often prescribed for arthritic pain and nerve pain in the short term. However, celecoxib has several nasty side effects, including abdominal pain, nausea, and diarrhea.

In higher doses, celecoxib’s side effects may include kidney failure, heart attacks, strokes, gastrointestinal perforation, gastrointestinal bleeding, and anaphylaxis (a severe, life-threatening allergic reaction). Beta-caryophyllene and CBD could be an alternative to such NSAIDs.

CB2 receptors are a potential therapeutic target for many different neurodegenerative disorders. The downregulation of CB2 receptors has been reported in the brains of Parkinson’s patients, which leads to inflammation and brain degeneration.

Beta-caryophyllene acts on CB2 receptors to soothe over-inflammation in the brain. The activation and upregulation of CB2 receptors are believed to protect against the neurodegenerative changes in those with Parkinson’s disease (PD).

Levels of CB2 receptors are also increased in those with Alzheimer’s disease (AD), “mainly in microglia surrounding senile plaques, and their expression levels correlate with the amounts of [certain] plaque deposition.”

According to the above study, beta-caryophyllene may help reduce inflammation of the neurons in the brain and remove the plaques associated with Alzheimer’s.

Although beta-caryophyllene has physiological effects, it does not bind to CB1 receptors and has no psychoactive effects. And for all its benefits, studies have found little-to-no adverse side effects in beta-caryophyllene.

How to Use Beta-Caryophyllene

How to use beta-caryophyllene depends on how you seek to use cannabis as medicine. Since it is a part of medical marijuana, it’s difficult to precisely dose for a terpene only when consuming the whole plant.

Beta-caryophyllene can be great for treating anxiety, but when combined with high amounts of pinene, limonene, THC, and THCV, it may cause more anxiety. It may work best to start with lower doses and see how the entourage effect impacts your usage. This combination of cannabinoids and terpenes may be helpful for:

For anxiety, insomnia, and chronic muscle and joint pain, beta-caryophyllene combined with the following may be a more suitable choice of cannabinoids and terpenes:

Again, we recommend starting with lower THC potencies regardless of beta-caryophyllene and increasing the potency as needed to aid with a specific condition. If you need further guidance on dosing, we recommend you ask your Leafwell doctor.

Many varieties of cannabis contain beta-caryophyllene, with some types containing more than others.

The amount of beta-caryophyllene in a particular strain depends on where and how the cultivar was grown and its genetics. The test results on the packaging are more likely to tell you this than a strain name.

However, the following varieties of cannabis in the Girl Scout Cookies (GSC) family have been found to contain high amounts of beta-caryophyllene consistently:

Some cannabis varieties that carry Kush genetics have also been tested to contain beta-caryophyllene, including:

Again, though, the name alone won’t be the best indication. Varieties are often mislabeled, and it’s always best to check the test results instead of for precise amounts. 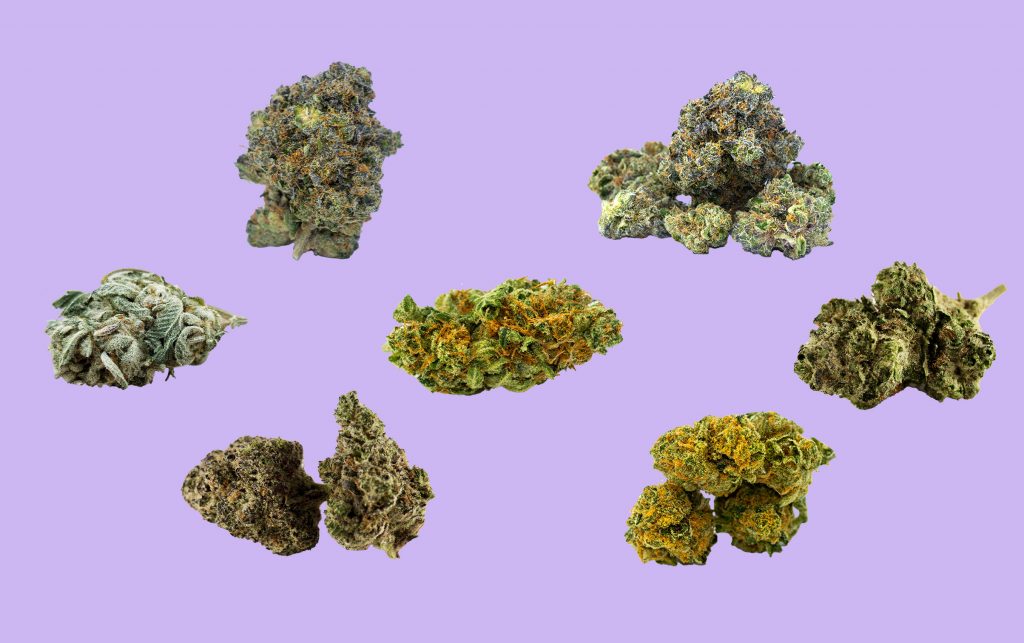 To learn more about how beta-caryophyllene may enhance your wellness, connect with a Leafwell doctor today.

What Is Myrcene, and What Does It Do?

Myrcene is one of the most common terpenes found in cannabis. It is known for its musky, earthy aroma and sedative effects.

CBD vs. THC: Is One Better for You Than the Other?

Is CBD alone healthier than marijuana/cannabis? What’s the difference between CBD isolate and full spectrum cannabis oils, and what are the advantages of each? Check out the answers, here at Leafwell.