The cannabis industry is made up of all genders, races, and religions. And, while the industry is continuously evolving for the better, it still has a long way to go before it’s wholly and completely inclusive.

To better understand the struggles minorities and underrepresented groups in the cannabis industry face, Leafwell’s CEO, Emily Fisher, sat down with Sheena Noire, the Founder and CEO of Cannabis Noire, an organization dedicated to providing education, opportunities, and resources to minorities and underrepresented groups within the cannabis community and industry. She’s also the author of the upcoming book “Mommy’s Medicine — An Illustrated Explanation of Why Mommy Uses Cannabis,” designed for children ages 6-16. 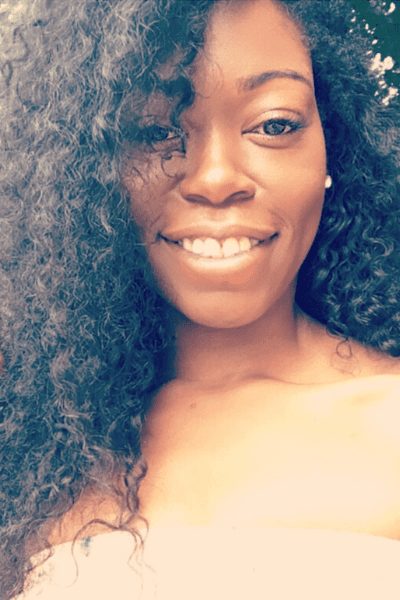 As this new industry unfolded in the state, Sheena Noire saw the need for an organization that focused on groups that aren’t commonly represented in the cannabis industry. Thus, Cannabis Noire was born.

What Is Cannabis Noire?

Operating in Pennsylvania, Cannabis Noire is an “organization dedicated to helping underrepresented groups and minorities enter the cannabis industry. [Cannabis Noire] also provides resources and education on how to safely enter the space.”

A large part of what the company does is, in Sheena’s words, “destigmatize candidates from marginalized communities.” They work with “LGBTQ+ groups, veterans, the African-American community, amongst many others, to continuously make the cannabis industry a more equitable space for everybody.”

I went into a variety of different advocacy missions, campaigns and initiatives, including helping communities and ex-offenders who were victims of the criminal justice system to enter the cannabis space. We act as liaisons between them and the community, and we also work closely with the cannabis industry to help give them opportunities to enter the legal medical market.

A big part of our mission is to make sure we help create a better message that resonates with the audience; something that’s more genuine….We want to see [the cannabis industry] becoming a more equitable space. A genuinely medical, patient-focused space. 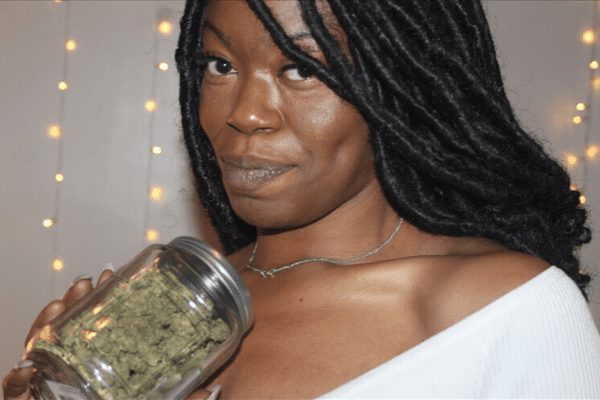 In addition to ensuring that these groups are seen and heard, Sheena is also steadfast in making sure that the cannabis industry doesn’t end up looking like the rest of corporate America. One industry conference, in particular, solidified that stance:

“When I got [to the conference] it was nothing but white men. It was actually a business opportunity conference, not like a cannabis conference. So I wasn’t expecting what I saw. I was grateful that I had the opportunity to stumble across this because the conversations were about infrastructure, manufacturing, distribution, and shipping.”

[It] was [not] about advocacy, inflation, and decriminalization, [which is] a much bigger conversation, and it was very telling that nobody — not women, not Black people, not Black women, the underrepresented groups — was anywhere to be seen. The vets weren’t there, the LGBTQ community wasn’t represented.

“Immediately, I was like, ‘Okay, this is weird. I’m going to tell everybody about this event. If I don’t know, other people don’t know. So I started some information sharing. I hosted a few events, and people got very interested in them. They wanted to learn more about it, or they were already cannabis users, or a new cannabis user, or had some other interest in it.”

“We connected with businesses like yours that are offering information and resources. We regularly host patient education events and classes. So it’s grown exponentially, but it’s all been on the curve of what people have wanted from us.” 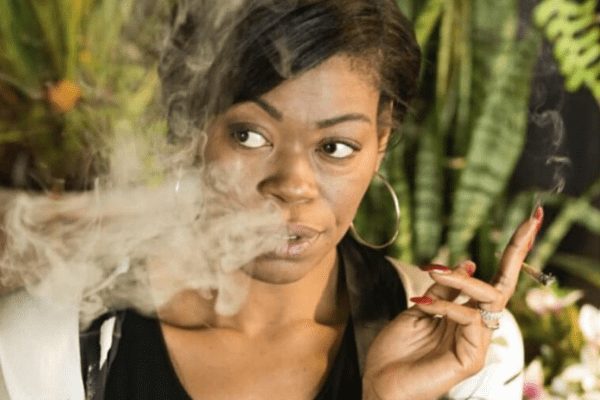 Being Black in the Cannabis Industry

We asked Sheena about her experience of what it’s like to be a Black woman working in the cannabis industry.

“I mean, there’s always those existing challenges as a Black woman and in corporate spaces, or in spaces where you essentially are by yourself and the only represented woman or Black person. So it can be very heavy, and it can feel very burdensome very regularly, where most people won’t find such weight.”

“But it’s also a very empowering place because you’re also constantly sort of self-motivated, and want to find new ways to better represent your group. I enjoy doing what I do, though, and I meet a diverse range of people. You’re also the new person, so you have to bring a certain energy to prove yourself and make your mark.”

“There are opportunities to get into dispensaries, but we don’t want those aspirations to be limiting, and that we can scale and move into a variety of different areas. There are lots of different opportunities out there, all with their own unique challenges.”

“So, initially, very frightening, but eventually more and more insightful and empowering.”

So, what can a person expect when they come in contact with Cannabis Noire? The organization tackles everything from investing, to business development, and more.

One of the first things we did was work with a stockbroker who was very interested in bringing in more cannabis clients. We partner with him, and he’ll get a free education event. 98 people showed.

Fom that, we formulated programming and we started creating initiatives and started connecting other people who worked on the Stock Exchange. People [who worked in the] stock market who knew about this and understood investing and understood money and financing.

We connected the people in the cannabis community to them and created opportunities. We also wanted to make sure that it was something that was well thought out. The business was well planned. 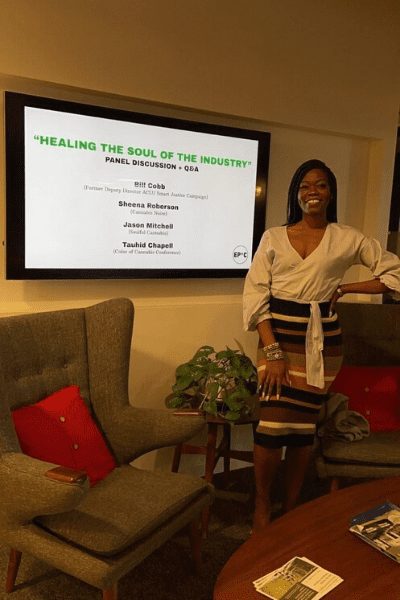 In addition to helping community members access investment opportunities, the company does advocacy work, helps write legislation, works with senators and the Criminal Justice Department in ex-offender programs, and more.

But, Cannabis Noire can’t transform the cannabis industry alone. We go on to question Sheena if she thinks that enough is being done to help minorities:

“I would say, ‘No’. We have a lot of obstacles that are easy fixes if other folks who claim to step up did so. A lot of what happens is we have people who make very broad blanket gestures to appease what they think the outcry is about just for the sake of saving face.

So they’ll go paint a mural, or they’ll hang a basketball court. While it’s OK, it almost feels like it doesn’t do anything tangible for our community. You’re getting a pat on the back like you’ve made your broadcast to the world about this mural. But yet there are children who have no summer programs. There are children who lack Internet access to online work. There are families who are in need of transportation, assistance, food, and housing.

“We have these tangible obstacles that we can directly fix. We have the resources and the proper support, but nothing’s connected. I think we miss the mark when we don’t have conversations like this, as this is how the obstacles to growth are alleviated. By having a conversation with someone who knows the right people, who is working with these families and communities, and who understands what they need. What needs to be addressed and understands how to fix it.”

Consider contacting Sheena and Cannabis Noire if you’re a minority-run business or have an idea and need some further help, advice, or even potential funding. Don’t forget to keep an eye out for Sheena’s book, “Mommy’s Medicine – An Illustrated Explanation of Why Mommy Uses Cannabis.” 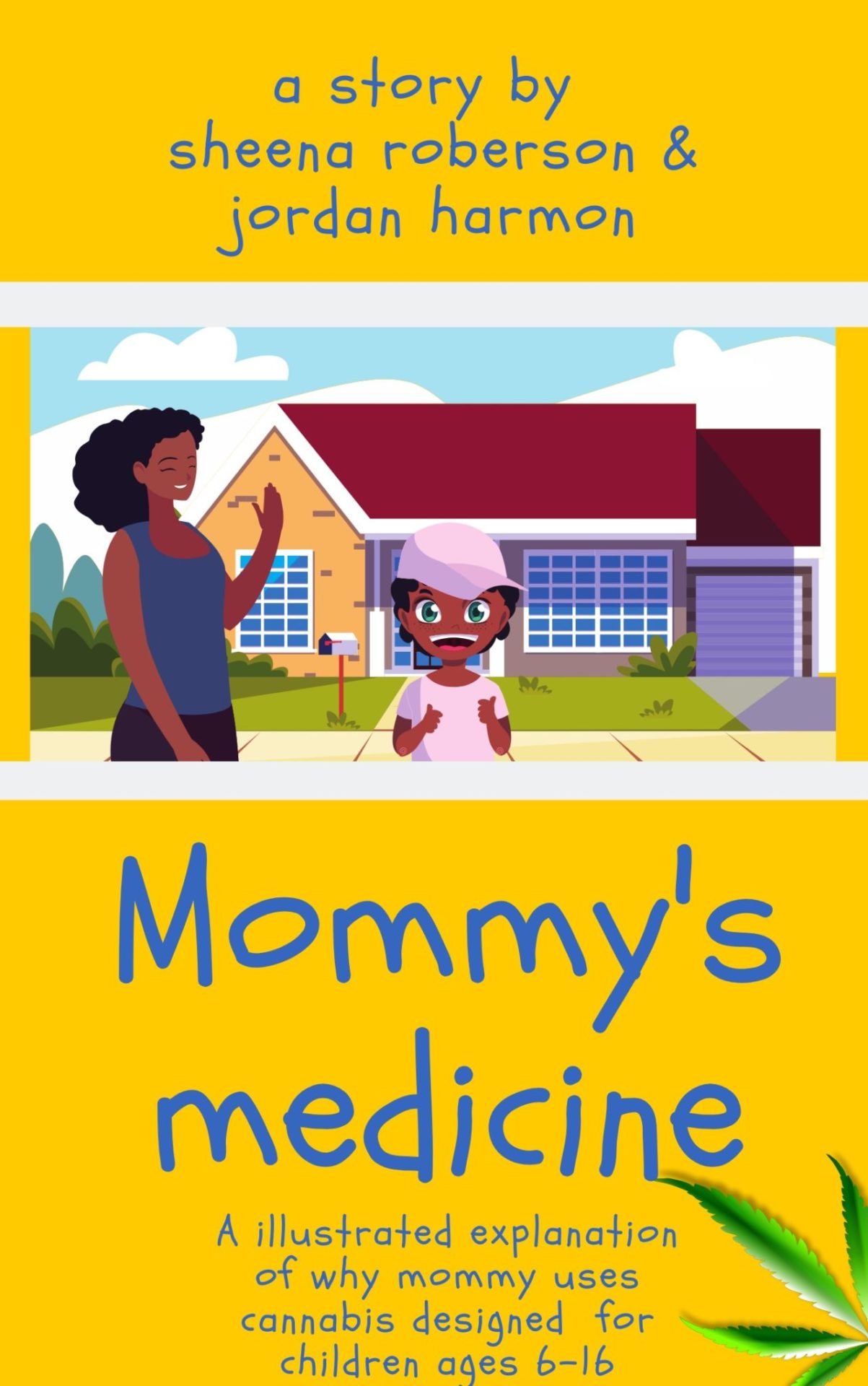 Diana believes that for every human illness, somewhere in the world there exists a plant that is a cure. As a cannabis professional and long time advocate, she seeks to not only eradicate the stigma that has plagued the power of cannabis, but also open the flood gates to more holistic treatments and fuel a societal transgression towards earth consciousness and natural living. A California native, backed with a decade of SaaS industry management experience, Diana proactively works to enhance the patient journey at Leafwell. She finds satisfaction in being part of a team, ingrained in the cannabis movement, that is setting a global precedence in customer care and education.

8 Black-Owned Cannabis Dispensaries to Visit Around the U.S.

In honor of Black History Month, Leafwell takes a look at eight of the top Black-owned cannabis businesses and dispensaries in the United States.

Meet Gary Chambers Jr. and six other Black political leaders who are driving change and social justice on the path toward cannabis legalization.

6 Black Cannabis Doctors and Scientists You Should Know

These six Black physicians have been integral parts of shaping our current understanding of marijuana and its uses in medicine.