Unfortunately, pets like cats and dogs cannot receive the same health benefits from medical marijuana that their human pet owners do. While CBD and hemp might be popular ingredients in supplements and treats for cats and dogs, THC is toxic for your pets and should be avoided.

Just like you wouldn’t give your pets other medications you use, medical marijuana is no exception. Since delta-9-THC is one of the main ingredients in most medical cannabis formulations, it will cause significant harm to your cat or dog.

Dogs, like humans, have an endocannabinoid system (ECS). This nerve cell signaling system has several effects on your body, such as maintaining homeostasis. This system is made up of receptors, which are tiny proteins on the surface of your cells that respond to internal chemicals released in your body. Marijuana is an external compound that can interact with this system.

Cats share this similarity with dogs; thus, THC is not safe either. If you wonder how medical marijuana might affect other pets, such as rabbits or birds, it’s probably best that they avoid cannabis too.

There are not enough studies on other animals to understand how they respond to THC, CBD, or other cannabinoids. Much of the drug effect information for dogs and cats is collected from emergency clinics since testing cannabis on animals is often banned. 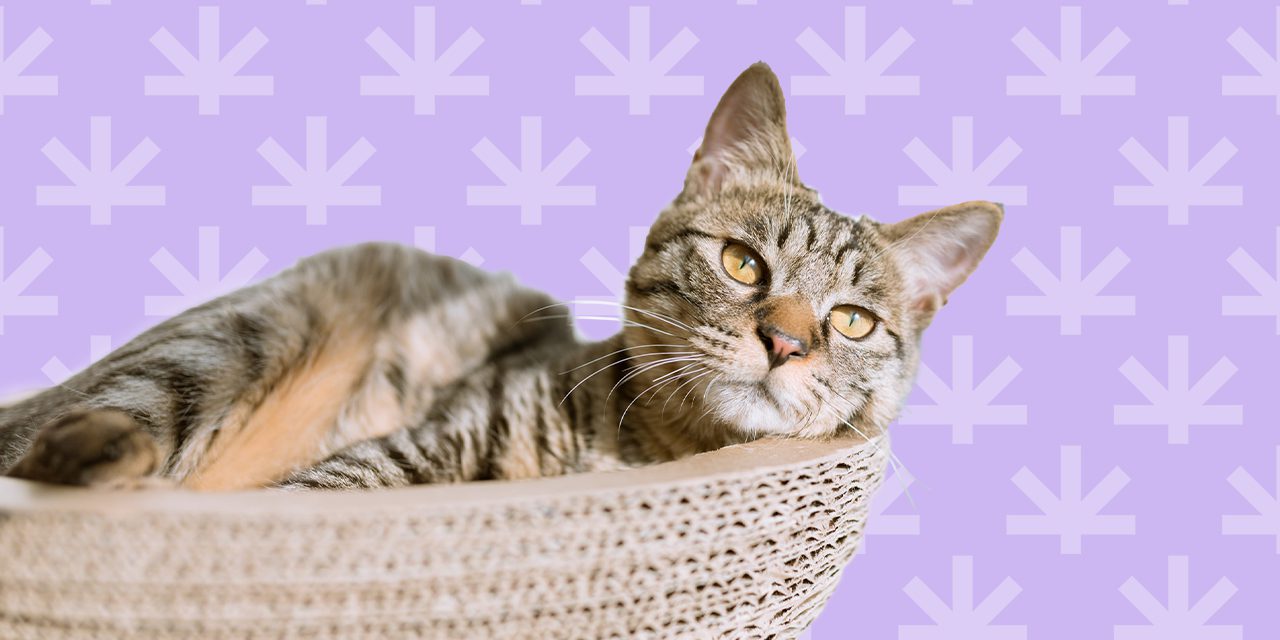 Dangers of Marijuana for Pets

While THC is dangerous to dogs, other compounds are commonly added to edible forms of marijuana that a pet owner also needs to consider. In addition, understanding the signs of toxicity is also vital since you may not be aware that your pet has consumed cannabis until they become unwell.

Alongside THC, other ingredients found in edibles are toxic for dogs and cats. These include:

Homemade goods usually contain many ingredients, and store-bought edibles might also have some.

If you are using edible products and your pet manages to eat some while you are not looking, it would increase the likelihood of your pet’s survival to mention to a veterinarian all of the ingredients they consumed. While THC is the primary concern, the vet would also need to treat your dog for other substances that might add to the overall toxicity.

THC is toxic to pets because they are more sensitive to this compound than humans. However, smaller pets like cats and small dogs might experience more significant adverse effects due to their size. If there is a chance your pet has consumed THC, you need to seek veterinary care for them urgently.

However, a lot of the time, pets often swipe something they shouldn’t eat when their owner is not looking. Therefore, it is crucial to understand what symptoms to look for because you probably won’t know that your pet has consumed THC until it becomes ill. If you know what has happened, you should not wait for the symptoms to appear before taking your pet to the vet.

Early symptoms to look for include:

If the symptoms are left untreated, there is a high chance that your pet will become unresponsive, fall into a coma, and stop breathing.

Is CBD Safe for Pets?

While CBD might have different effects from THC, many hemp products may contain THC. If consumed in high quantities, it may cause THC toxicity in your dog or cat. Therefore, CBD products can be toxic.

Benefits of CBD for Pets

One study, which consisted of 16 dogs, found that 89% of dogs with epilepsy had further seizures when they consumed chicken-flavored CBD oil. CBD could be beneficial in preventing seizures for dogs, but further testing is still required.

Another study demonstrated that dogs given CBD oil had a noticeable reduction in pain based on their activity level. Again, this suggests that dogs can experience similar effects from CBD as seen with humans.

Other research also shows that CBD can reduce pain and anxiety for both cats and dogs. Understandably, with more awareness, anxiety in animals is more recognizable, and scientists are considering whether CBD is a viable option.

Side Effects and Risks of CBD for Pets

Enough evidence suggests that CBD could be beneficial for cats and dogs. However, while this research does appear promising, you should still avoid giving your pet CBD unless a vet recommends this treatment. Currently, there are no exact guidelines on the dose, and since animals come in many different sizes (like humans), no single dose suits all.

CBD is likely to be less toxic than THC, and experts think poisoning from CBD could be minimal. However, the side effects depend on the amount of CBD your pet has consumed, and as mentioned, there are no guidelines regarding how much CBD is safe.

Another point to consider is that some medical marijuana formulations contain CBD and THC. Therefore, CBD will not counteract the effects of THC, and toxicity will occur.

Although CBD in its pure state appears to be safe and well-tolerated by animals, some reports of it causing liver issues in dogs; pay particular attention to the certificate of analysis (COA) of the product and ensure that it has no THC to reduce the chances of adverse side effects if you decide to give it to your pet.

If your pet has taken too much CBD, it may cause vomiting, disorientation, sleepiness, tremors, and irregular breathing. If your pet is not acting how it usually would, it is worth taking them to a vet. However, the occasional use of pet-friendly, CBD-only products is generally considered minimally toxic for cats and dogs.

The Bottom Line: Is Medical Marijuana Effective for Pets?

Medical marijuana is not recommended for pets. Should your pet consume cannabis, then you should seek help immediately. Some evidence suggests that CBD might benefit cats and dogs, but further research on dosing and safety is required.

Wondering which concentrates or extracts are the best? Here’s some of the best in the world of hash, rosin, and dabs.

Is medical marijuana a good choice for everyone? Unfortunately, it is not recommended for everyone, and some people should avoid using it.