Are you looking to make great vegan edibles? Are you overwhelmed by how many recipes are out there? Us too, but don’t worry, we’ve got you covered.

The intersection between consumers of edible medical cannabis and dietary absolutists who eat only vegan foods is arrived at often and from many directions in these days of widely legalized medical marijuana availability. Any devoutly vegan cannabis enthusiast who casts a basic Internet search for recipes that will produce THC and CBD infused food groups containing zero animal products will reel in myriad plant-based methods for cooking up edible servings of the cannabis plant. The vegan aspiring cannabis chef may be overwhelmed and baffled by the array of options that can turn raw cannabis material into delicious and efficacious marijuana confections of varying medical potencies.

The exploratory vegan chef calculates there are hundreds of viable methods to manufacture and eat medical marijuana edible wonders that are produced with no involvement of any animal parts or byproducts. “It’s almost too much canna goodness to behold,” exclaims the budding cannabis cooker. “Where would I even begin?”

A good next move would be to read the rest of this Leafwell article on How to Make Vegan Edibles.

One inherent advantage in the quest to produce vegan marijuana edibles is that no animal DNA is present in the cannabis plant or its extracts. Put simply, cannabis is vegan. The prime rule, then, of cooking up edible vegan cannabis delights is do not add any animal protein to the mix.

Like any cooking endeavor, crafting vegan cannabis edibles to satisfy a vegan’s personal taste starts with ensuring that all necessary pots and pans and tools of the cooking trade are in place. Nothing quite destroys the flow of creative cannabis cooking energy like shoving all the marijuana enhanced ingredients to a back burner while the thwarted cannabis chef dashes out into the neighborhood attempting to borrow an electric beater.

The vegan cannabis chef should closely read through any vegan cannabis edible recipe before attempting to reproduce the vegan cannabis dish. Make sure no surprise implements or ingredients pop up in the fine print. Do not be surprised if you are missing at least one seasoning or casserole dish. Be prepared to improvise or have at least one friend you can call who’ll rush over and save the day. 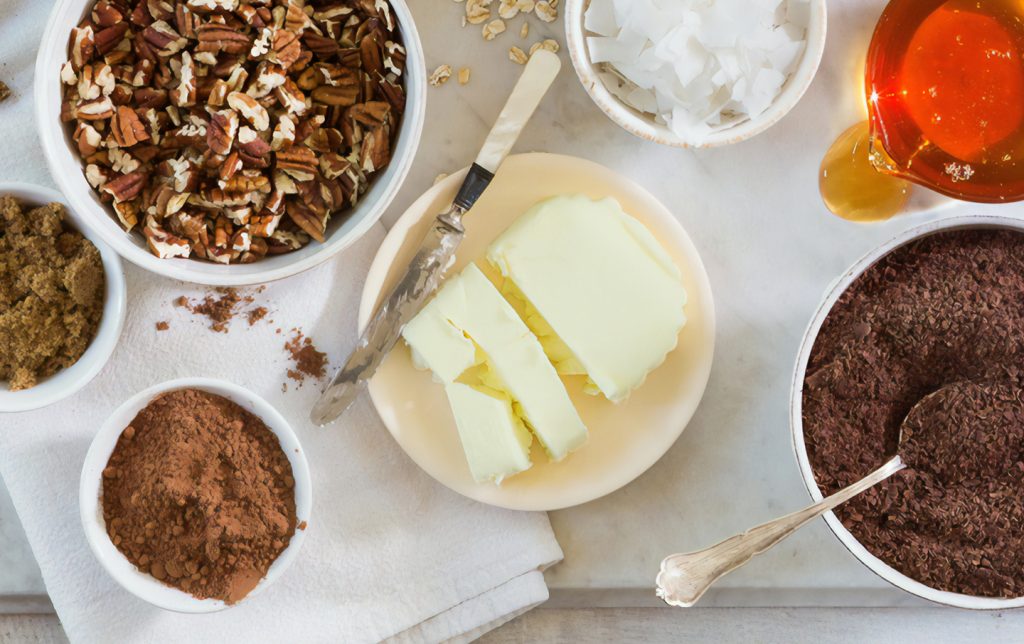 How To Tell How Strong Your Edibles Are

One concern that every cannabis chef will address, if not initially certainly upon the second batch of vegan cannabis edible treats, will be how to determine THC or CBD potency.

After giving a caveat that “there is no way to know exactly how potent your end product is without a lab,” Cannabis Care by Design presents what it terms “an easy calculation you can do to find an estimate” of just how powerful your marijuana-infused delicacies will be.

Factors in this easy calculation include the number of grams of flower used in the vegan cannabis edible recipe multiplied by 1,000 to convert the grams to milligrams (mg).

The cannabis flower’s THC percentage is then multiplied by the flower’s weight in milligrams, a total that will determine the THC percentage for the whole batch. Divide the total milligrams by the number of individual servings, and the dosage should be arrived at.

If these calculations seem like an elaborate card trick, Cannabis Care by Design supplies a handy example in which seven grams of flower with 12.5 percent THC content factors into anywhere from 72.91 mg to 18.23 mg of THC per serving.

While it’s impossible to be completely accurate, we recommend you take a moment to calculate how much THC your edibles will contain. That formula again is:

Milligrams of flower x THC % = THC % within the edible batch

Two cannabis infused cooking elements that are essential to opening the wide world of vegan marijuana foods are cannabutter and cannabis oil. Having at least one of these activated ingredients in the vegan canna chef’s arsenal is “essential” to cooking up effective marijuana edibles.

Get Our Delicious Canna Oil Recipe

Equally essential to cooking up any forms of cannabis oil or cannabutter is a mandatory initial step of “decarbing” the marijuana flower. Decarboxylation is the process of converting the plant’s THCA (a raw, inert chemical) into THC. Without decarboxylation, the marijuana’s potential will be wasted. Any edible treats created with cannabis that has not been decarbed will be non-psychoactive. The conversion of THCA into THC most often occurs when cannabis flower is fired up and consumed as smoke.

Marijuana ash is useless in creating psychoactive cannabis oil or other efficacious cannabinoid unguents. For that reason, the cannabis cook must follow a plan to induce decarboxylation without the leaf bursting into flame.

Heating the leafy marijuana ingredients at 240 degrees Fahrenheit for between 45 and 60 minutes converts the cannabis plant’s THCA into THC, retaining and activating all THC, CBD and terpenes, providing the marijuana chef with the greasy basis for a plethora of cannabis comestibles embodying all the magical healing properties of medical marijuana.

Two Vegan Cannabis Foodstuffs to Prepare Before All Others

After decarboxylation is complete, the work of making cannabutter or cannabis oil is ready to begin.

In its primer for making cannabis oil, Homestead and Chill suggests using organic, homegrown cannabis alongside coconut or olive oil to concoct a “pleasant-tasting and very nourishing” fundamental cannabis ingredient that has “strong natural antifungal and antimicrobial properties.” Homestead and Chill points out that coconut oil, being higher than olive oil in saturated fat, may be the better oil for binding cannabinoids.

The process of concocting cannabis oil requires a double boiler for starters and a willingness to spend up to several hours of low simmer and stir time before straining the cannabis and oil compound through cheesecloth into a large bowl, where the cannabis oil should retain efficacy for six months to a year.

Making a batch of Cannabutter will, like cannabis oil, require multiple hours of cooking time, and sticks of dairy-free (vegan) butter rather than cups of olive or coconut oil. Adhering to a basic cannabutter recipe will reward the patient and mindful vegan cannabis cook with an airtight storage container that has captured the beneficial properties of cannabis infused cuisine.

What Kinds of Vegan Cannabis Edible Delights Can You Make Now?

Once the eager vegan cannabis edible cook is equipped with a supply of decarboxylated cannabis butter or marijuana cooking oil, the vegan cannabis menu opens for exploration and experimentation.

The exploratory vegan cannabis chef is back to the same problem that presented at the start: With this overwhelming range of vegan medical marijuana comestibles, where does a vegan cannabis enthusiast start? We recommend you start with one of your favorite vegan recipes and sub out standard oil or butter for your canna oil or cannabutter. Let us know how it goes in the comments below.

Get Our Delicious Cannabutter Recipe