Many newcomers to medical cannabis often worry about its addiction potential. They’re also bombarded by opposing views, with one side repeating the old propaganda of, “It’s a terrible substance, on par with cocaine and heroin,” and the other saying, “There’s absolutely no harm or risk of addiction whatsoever.”

Both views are wrong, but it would be fair to say that the latter is “less wrong” than the former. In fact, the pharmacology of cannabis is complex enough that it may even serve as a treatment for drug addiction. However, this doesn’t mean there aren’t some potential issues regarding cannabis and addiction. We deep dive into the details in this piece.

What’s the difference between abuse and dependence?

Formally, there is a separation between substance abuse and dependence on a substance. Abuse is when a person starts using a substance separated from convention, for example, according to physician recommendations. Dependence simply refers to when a person becomes accustomed to a particular substance.

For example, a person taking vicodin as directed by their doctor is not necessarily abusing vicodin but may become dependent upon it. On the other hand, a person who uses vicodin above and beyond what its intended use, and is willing to put all other activities on hold to use vicodin, is abusing the drug. As for the term addiction, it refers to the use of a substance or activity to the detriment of all other activities (e.g., they’d rather spend money on the substance than eating well).

For many years, people used words such as dependence and abuse interchangeably, and with such imprecise terminology regarding addiction, it became difficult to tell which is which. So, about two years ago, “drug addiction” became “substance use disorder” (SUD) to overcome this difficulty in understanding.

Another common distinction is the difference between physical/physiological and psychological addiction. Physical addiction (usually applied to opiates, barbiturates, and alcohol) is where a person starts needing to ingest the substance to stay alive. Alcohol, for example, suppresses the brain’s “fight-or-flight” hormones. The brain goes automatically into “fight-or-flight” mode with excessive drinking, leading to the “shakes” as the alcohol leaves the body. Drinking large amounts of alcohol also desensitizes the brain’s GABA receptors, which then become prone to becoming “over-excited” without alcohol and can lead to deadly seizures.

So many people claim cannabis is not addictive because they are referring to addiction in the traditional sense. There is no danger of extreme physiological responses (i.e. death) if use is suddenly stopped. The psychological cravings generally seem to pale compared to those of cocaine or amphetamines. Yes, for some people, cannabis may disrupt their lives, but on the whole, it seems well-tolerated by most.

For many users, sudden cessation of cannabis is not too difficult. Some people feel irritable and may have a little difficulty getting to sleep, but tend to feel fine after a few days.  Vivid rebound dreams are also common after quitting cannabis use, and some people may sweat more profusely or experience nausea. Some may get a slight rise in temperature and “chills.”

However, most people, even regular users, tend to have no major difficulty in quitting cannabis. A loss of appetite and nausea may also present themselves. The withdrawal is far from deadly, unlike with alcohol or opioid withdrawal. Symptoms of cannabis withdrawal usually appear between one to three days after stopping use and generally peak in the first week of cessation. Most physical discomfort lasts about two weeks.

Why is cannabis less addictive than other drugs and medications?

What could be causing cannabis’ withdrawal effects? And why is cannabis so much less addictive than drugs such as opiates and cocaine? The answer to both questions could very much lie in both dopamine and the endocannabinoid system. Many drugs give users a massive hit of dopamine. Cannabis does as well but does sovia the ECS rather than directly affecting dopamine receptors, meaning it doesn’t necessarily produce the same “dopamine rush” that many other drugs do (although this is debatable). Also, as cannabis works via the ECS, the body can revert to a baseline level of dopamine rather quickly.

The other interesting thing about cannabis, and THC in particular, is that it can increase dopamine release and neuron activity and blunt the dopamine system with long-term use. In essence, people can become more tolerant of THC, although this may be mitigated by using a variety of cannabinoids, microdosing, using cannabis tinctures, and possibly strain switching.

Another reason why cannabis may be less addictive than other substances is because some cannabinoids, such as CBD, are also serotonin receptor agonists. Some research suggests that regulating serotonin levels may be a potential way of treating drug addiction, as many drugs deplete and blunt serotonin receptors over time. The complex pharmacology of cannabis means that it can have wildly different effects, including how addictive it may be for someone. This also depends on which sets of cannabinoids and terpenoids are being ingested and the individual’s physiology. On the whole, the more balanced and broad-range effect upon receptors seems to ensure that cannabis’ addictive potential is quite low. 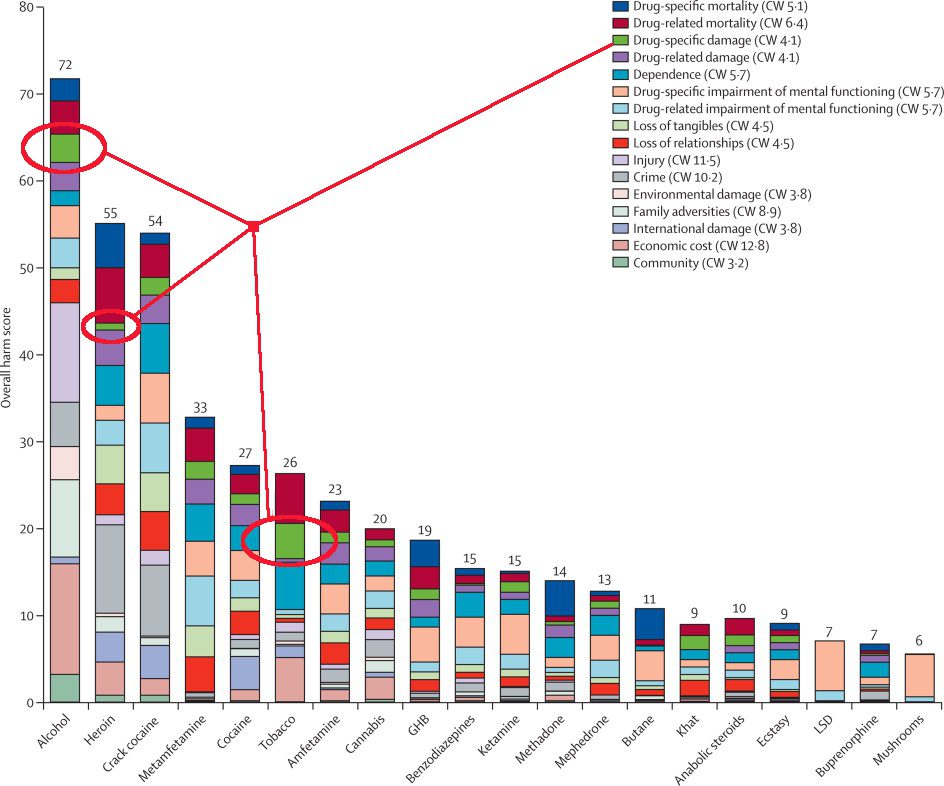 If tolerance to cannabis builds, is that physical addiction?

A common argument with a certain logic to it. If we were to define physical addiction this way, however, almost any substance could be seen as physically addictive, even though physiological dependence is not apparent.

Yes, using THC may reduce the body’s production of and sensitivity to endocannabinoids, but the “bounce back” of the ECS is relatively rapid, and the body will resume producing its own cannabinoids quickly. The “physical” side of withdrawal never takes hold in the long term for most people. Some people experience slightly more withdrawal symptoms than others, but these cases are few and far between.

Higher potency cannabis; should you be worried?

Although ingesting high amounts of THC alone may not be physically dangerous, it could be argued that the increased potency of today’s products has increased cannabis’ addictive properties. This could be the case because THC seems to boost dopamine production in the short term.

Yet, cannabis is the most commonly used illicit medication, so if this were the case, we’d see many more people going to rehab centers due to cannabis use. The dangers haven’t materialized in any significant sense, and there are many things cannabis users look for other than potency.

Where potency may become an issue, however, is how regular high THC use may lead to developing cannabinoid hyperemesis syndrome.

Is cannabis a gateway drug?

Maybe cannabis isn’t addictive, but does it lead to other, more addictive substances? The gateway theory leaves a lot to be desired, at best, and if we were to apply the gateway theory more fairly, it is alcohol and tobacco that could be said to be the primary gateway drugs.

Some research out there suggests that cannabis use may “prime” the brain for other drugs, as well as develop cross-sensitization with other drugs. Other research also suggests that cannabis users may be more prone to trying other, more harmful substances, but that could be due to a person starting off on more readily-available substances and then interacting with people who use other substances. For the most part, though, most people who use cannabis tend to stick with cannabis. When it comes to the medical use of cannabis in particular, it is unlikely that such people will start using more dangerous substances for recreational purposes. Medical cannabis is just that: medicine.

The age at which you start using cannabis matters

Research has traced most of the negative long-term effects (e.g., mental health, short-term memory, dependence) of cannabis can be traced back to the non-medical use of high THC strains when a person is young, and the brain is still developing.

Those who use cannabis when they are older (over 25) are more likely to benefit from the neurogenic effects of cannabis. Ideally, those who wish to use cannabis from a non-medical standpoint should start when they are older than 25. These users are less likely to develop cannabis use disorder around 9% of regular users. Conversely, regular non-medical users who start in their teens or younger are more likely to develop cannabis use disorder, with about 18% of regular users developing the condition. Overall, younger medical users and those who use it occasionally are unlikely to develop such a disorder.

We must also differentiate between medical and non-medical use to some extent. Many prescription drugs can damage young brains, and despite some drawbacks, cannabinoids could prove a far safer alternative to some medications. Also, THC shouldn’t be demonized, and it is possible to use non-psychoactive amounts (or to balance it out with CBD) to help treat chronic pain, insomnia, anxiety, and nausea. THC also has potential cancer-beating properties, so it may be useful for people of all ages if appropriately used.

What about an endocannabinoid deficiency?

Arguably, if a person is using cannabis to overcome an endocannabinoid deficiency, it is likely that phytocannabinoids may be putting the body back into balance. Users consuming the right cannabinoid-terpenoid profile and dosage could be using cannabis to normalize their physiology — this doesn’t necessarily constitute addiction.

Furthermore, if the patient is getting the proper dosage of the cannabinoids, they may suffer from little-to-no withdrawal at all. In this sense, cannabinoids could be compared to vitamins, where too much or little can cause complications.

Is cannabis as addictive as tobacco?

No, cannabis is not as addictive as tobacco, which contains highly addictive nicotine. Although not a common practice in North America, it is common for people to mix cannabis and tobacco in many other parts of the world. Some people who think they are “addicted” to cannabis are addicted to the tobacco in the mix. Indeed, several experts have stated that cannabis is less addictive than coffee.

We’ve already mentioned cannabinoids’ ability to modulate serotonin receptors, which is one-way cannabis could be an “exit” from drugs rather than a gateway. THC could also be a safer crutch than alcohol and opioids and replace the two. Beta-caryophyllene, a terpene and CB2 receptor agonist commonly found in many cannabis strains, has anti-addictive properties. 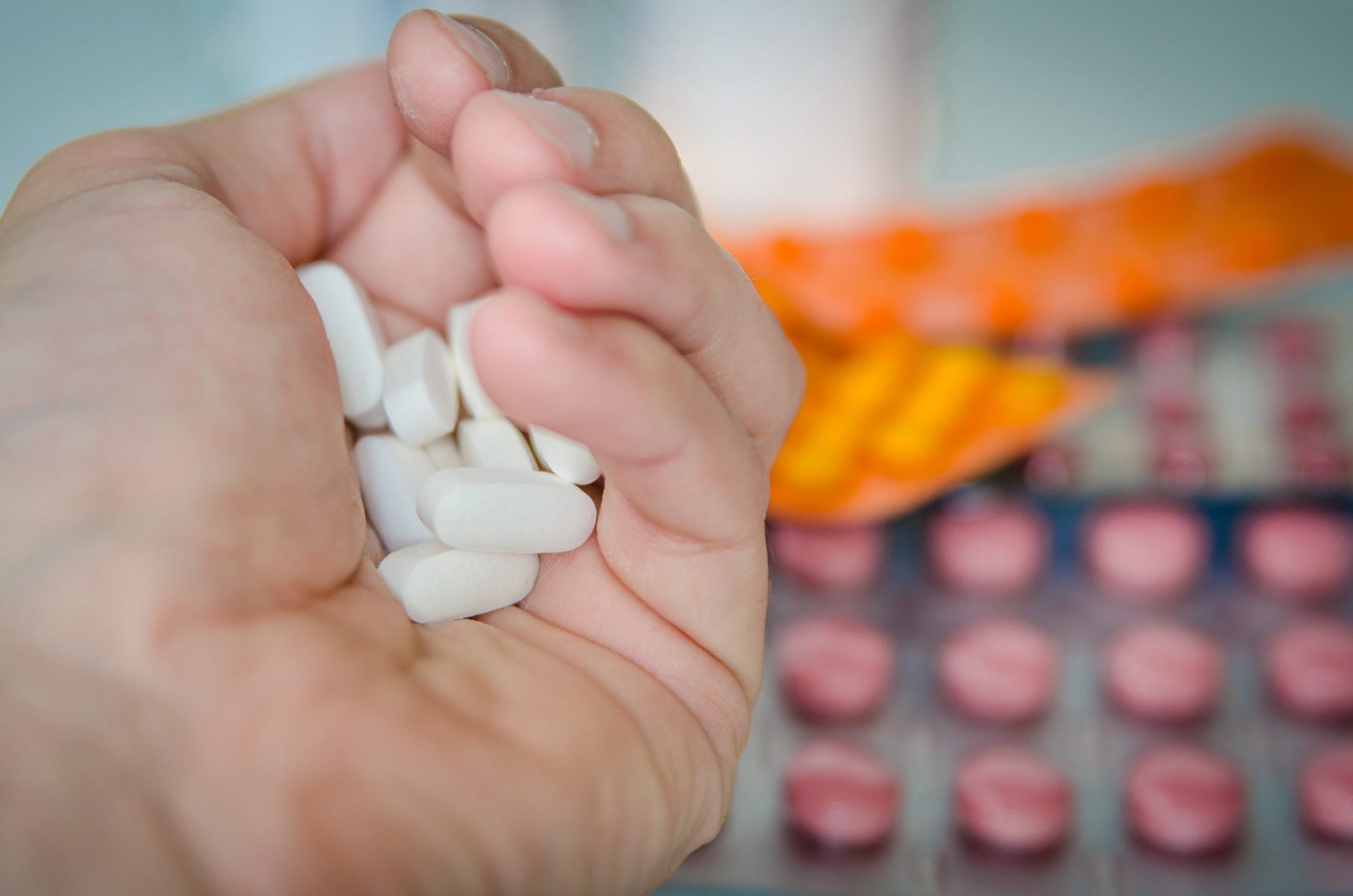 So, is cannabis addictive? A lot of it depends upon how you define addiction. In the traditional sense, no, cannabis is not addictive. In a more modern sense, overuse of cannabis can lead to addiction-like behaviors, but this level of addiction is not nearly comparable to that of heroin, cocaine, nicotine, or alcohol.

Can I Take Cannabis With Other Medications?

Cannabinoids interact with the liver enzyme CYP450 and various subtypes, interfering with the metabolization & processing of certain types of drugs and medications.

With popularity comes misinformation about cannabis and what it can (and can’t) do. Some marijuana myths are trivial, while others are potentially dangerous.

Does Weed Interact With Any Medications?

If you consume cannabis, there are certain medication interactions that you need to be aware of. Although these potential interactions can be harmful…