Can marijuana help you lose weight? In fact, evidence shows marijuana users are less likely to be overweight than the general population.

We’ve uncovered the scientific research behind the effects of cannabis on body weight. Learn how and why marijuana can have a positive effect on your body mass index (BMI).

Marijuana and Weight Loss: What the Research Says

Scientific evidence has demonstrated that smoking cannabis may increase metabolism. A faster metabolism helps you burn more calories during periods of rest and activity. Of course, more effective calorie burning can translate into lower body weight.

Beyond metabolism, the potential pain-relieving and stress-reducing properties of cannabis may also aid in weight loss. Logically, if you’re in less pain, you’ll be more likely to exercise and maintain a healthy weight range through regular activity.

Scientists know that stress strongly correlates with weight gain through increasing cortisol levels and other brain chemistry issues. While there are other factors at play, research has proven that stress may make people more susceptible to obesity.

People who are less stressed are more likely to have restful sleep. In turn, people who get adequate sleep are less likely to suffer from obesity. Cannabis on its own is also shown to improve sleep patterns in some individuals. CBD in particular has been identified as helpful for people with insomnia.

There is clearly more than one way that cannabis can help you lose weight, although these benefits may be indirect. But is there any way that weed can make you gain weight? 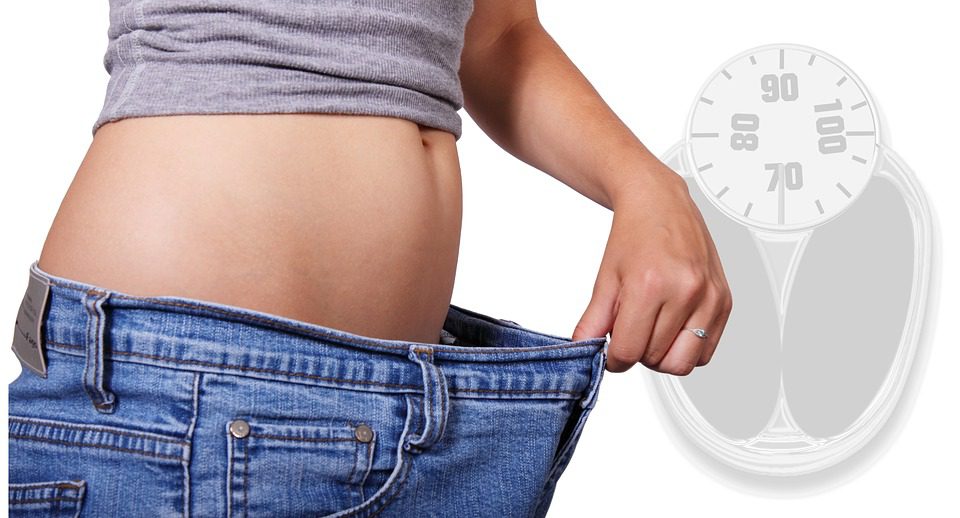 Can Marijuana Cause Weight Gain?

Marijuana has a reputation for making you hungry, commonly known as the munchies. But there is no evidence that cannabis alone can cause weight gain.

However, it appears that cannabis has the power to make food taste sweeter. What seems to occur in the brain is that the cannabinoid THC increases your desire for fatty and sweet food, but those desires are fulfilled more quickly.

In other words, your sweet tooth may be easier to satisfy when cannabis is in the mix. If your sweet tooth is satisfied faster, then weight gain would actually be less of a concern. Another interesting possibility could be that, due to the sweetness-enhancing effects of cannabis, fruit becomes a more attractive alternative to food with lots of processed sugars.

So why is marijuana associated with the munchies? The main cannabinoid (the chemical compound in the plant) that causes hunger is THC, in large part due to its psychoactive effects. Other cannabinoids, however, may exert opposite effects on the brain and send the munchies packing.

How Other Cannabinoids Affect Weight

In low doses, the cannabinoid tetrahydrocannabivarin (THCV) may have a beneficial effect on weight loss. THCV works by blocking CB1 receptors in the brain rather than activating them, meaning it does not have the psychoactive effects THC has. THCV, therefore, suppresses appetite.

This revelation has made THCV of particular interest for the treatment of obesity. However, high doses of THCV are psychoactive and can behave like and synergize with THC, so use THCV in moderation.

Here are some of the weed strains that have tested for higher amounts of THCV:

Using cannabis strains high in THCV is not a direct weight loss treatment, but it may at least stave off any weed-related hunger pangs.

Furthermore, both THCV and CBD are of interest for the treatment of diabetes type I and type II. This is because CBD and THCV could help regulate glucose levels and prevent insulin resistance. Sugars are processed properly, and dangerous levels of glucose don’t accumulate.

Another reason why CBD could be useful for weight loss is because of its effects on carbohydrate metabolism – it literally speeds up the processing of sugars. As sugar plays an active role in obesity, CBD could help marijuana users maintain a healthy weight.

CBD’s anti-inflammatory effects could also make it very useful for the treatment of nerve pain and diabetic neuropathy, meaning that the cannabinoid can have multi-pronged benefits for diabetes and eating disorders that go far beyond the number on the scale.

Are CBD and THCV miracle cures for weight loss? No, but these cannabinoids and others could serve as tools in the quest to achieve a healthy weight.

Although cannabis users have a lower body-mass index (BMI) than non-cannabis users, research has shown only about a 2-pound difference between the two groups. This suggests that, although the effects are modest, careful use of marijuana and cannabinoids can help maintain a healthy weight.

When it comes to losing weight, it is unlikely that cannabis alone will have any major effect. Combined with a healthy diet, exercise, and proper sleep, though, cannabis could very well be an integral part of a healthy lifestyle.

If you are interested in using marijuana to enjoy a healthier lifestyle, you’ll need to secure a medical card in order to buy and possess high-quality marijuana legally. Leafwell can help you see a doctor in our virtual clinic and apply for your state medical marijuana card in minutes.

Why Does Weed Make You Hungry?

Marijuana has a reputation for making users hungry, but is that reputation deserved? Learn about the connection between weed and appetite.

How to Use Cannabis to Start Your Day

Make cannabis a part of your morning wellness ritual. Learn how to make a cannabis-infused breakfast or beverage to kickstart your day.

What Are Trichomes and What Do They Do?

Trichomes are what make cannabis special, responsible for producing THC, CBD, terpenes, and much more.