There is no evidence to suggest that smoking marijuana directly causes lung cancer. However, smoking marijuana may present an increased risk of developing lung cancer. It should be noted that most of the risks regarding lung cancer in connection with cannabis use are associated with smoking cannabis. Other routes of administration, such as tinctures, inhalers and topicals, may mitigate some of these risks.

Smoking cigarettes is the number one risk factor for developing lung cancer, but vaping and/or smoking marijuana may not be much healthier for the respiratory system. Learn about the possible connection between smoking marijuana and lung cancer, along with other potential health hazards of smoking and vaping. On the flip side, discover the potential benefits of cannabis for helping to manage the side effects of cancer and cancer treatments.

The Connection Between Smoking and Lung Cancer

A toxic cocktail of more than 7,000 carcinogen chemicals is found in every cigarette. Of these, at least 70 are known carcinogens (cancer-causing chemicals) that are harmful to humans and animals alike. Tobacco smokers are up to 30 times more likely to be diagnosed with lung cancer than people who do not smoke.

Marijuana smoke may contain many of the same carcinogens that tobacco smoke does, although some research suggests that cannabis and tobacco smoke are not equally carcinogenic. Scientists associate smoking cannabis with large airway inflammation, chronic bronchitis and other respiratory health issues.

Furthermore, research suggests that tetrahydrocannabinol (THC), the main psychoactive compound in cannabis, may have immune-suppressing effects which in turn increases the risk of lung infections. But whether smoking cannabis is a direct causative factor in the development of lung cancer remains unproven. Some of these dangers may also be due to fungi, pesticide residues and other adulterants.

Marijuana and Lung Cancer: What the Research Says

Current research on marijuana and lung cancer is scarce, but there have been some studies to suggest that marijuana elevates the risk of lung cancer. One study spanning 40 years concluded that cannabis use might increase lung cancer risk. In the study, cannabis smoking classified as “heavy” was associated with more than a twofold risk of developing lung cancer.

In contrast, other research studies have not yielded the same results. Data published in the Journal of Thoracic Oncology found no correlation between cannabis use and increased lung cancer risk. The authors of the study declared, “There is no conclusive evidence that cannabis smoking is associated with an increased incidence of lung cancer.” The authors of this report went on to discuss the various benefits that cannabis may provide for people with cancer.

Even though polycyclic aromatic hydrocarbons (PAHs) (a class of chemicals created by combustion) are present in both cannabis and tobacco smoke, the two substances work on the body in different ways. Some research even suggests that cannabinoids like THC could help protect against the effect PAHs have to some extent. One case report and literature review suggests that CBD (and in the case report, CBD oil particularly) “may have anti-neoplastic [anti-cancer] properties and enhance the immune response to cancer.”

The Flip Side: How Marijuana Can Help with Cancer

There is still more research to suggest that cannabis, especially the cannabinoid CBD, may even be able to shrink tumors. One study hailed CBD as a promising anti-cancer drug due to its potency in attacking cancer cell lines and tumors in various forms of cancer, including colorectal, cervical and pancreatic cancers.

Cannabinoids like THC and CBD have anti-inflammatory properties, which could make them useful for prohibiting lung cancer cell formation. However, it must be stressed that most of the research on cannabinoids as a treatment for lung cancer is on cell lines and animals, not humans.

Research continues to emerge on the healing potential of cannabis with regard to cancer, but based on the research so far we cannot definitively say whether or not cannabis and cannabinoids can be used to treat cancer. Cannabis could be a supplemental treatment option for some people with cancer and those suffering from nausea, appetite loss and chronic pain due to chemotherapy, under a physician’s supervision.

Other Dangers of Smoking or Vaping Marijuana

Beyond the health hazards of vaping, inhaling marijuana through other means (e.g. a blunt or bong) may present other risks. 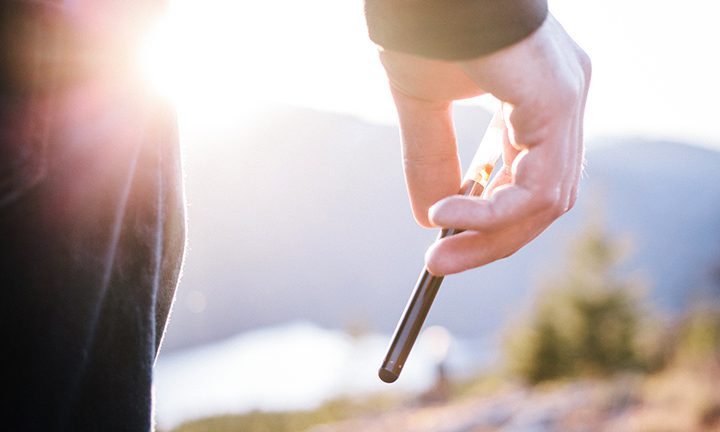 Inhaling secondhand smoke from marijuana may be dangerous. First, there is the risk of secondhand smokers (especially children) becoming intoxicated from the THC released into the air through a joint or vape pen. There has also been research that indicates children and adolescents who are exposed to secondhand marijuana smoke suffer cognitive issues including memory and attention deficits.

Secondhand tobacco smoke is known to produce increased health risks to the heart and lungs. Such risks have not yet been clearly linked to secondhand cannabis smoke, and more research is necessary.

Research published in the medical journal Respirology Case Reports states that recreational marijuana use, notably with bongs, may cause a “variety of lung disorders, including potential life-threatening lung infection.”

The Bottom Line: Does Smoking Marijuana Cause Lung Cancer?

Smoking marijuana has not yet been found to directly cause lung cancer. However, smoking and vaping marijuana can be an aggravating factor in lung inflammation, chronic bronchitis and other respiratory illnesses. To be on the safe side, consider other administration routes such as cannabis topicals, marijuana edibles and cannabis delivered sublingually (under the tongue).

Leafwell’s virtual clinic is open for new patients interested in applying for a medical marijuana card online. Reach out today and our healthcare professionals will get you started on the application process for your MMJ card.

Cannabis, Cannabinoids and Their Use In Cancer Treatment

How can cannabis help cancer patients? Find out how cannabinoids like CBD may play a role in fighting cancer

There have been many studies on the efficacy of using cannabis to treat colorectal cancer, many with positive outcomes.