It is possible that there is an association between consuming weed and the development of stomach ulcers.

There are several plausible reasons this association might exist. For example, cannabis might increase the risk of inflammation, as well as alleviate the pain through its analgesic properties, which could in turn mask ongoing inflammation in the stomach, leading to the progression of stomach ulcers. However, most negative results were seen with synthetic cannabinoid use, or patients with cannabis use disorder (CUD).

On the other hand, there is also evidence that points toward the use of medicinal cannabis to prevent and treat stomach ulcers, as cannabis contains several cannabinoids with anti-inflammatory properties. CBD may decrease gastric acid and increase blood flow to the lining of the stomach, which could protect the stomach and help manage some of the side-effects of ulcers, such as pain and GI upset.

An ulcer is an open, inflamed sore that forms on an interior or exterior body surface. Ulcers can form in different organs throughout the body.

For example, a stomach ulcer develops in the lining of the stomach when the mucus lining that surrounds and protects the stomach breaks down and enables gastric acids and enzymes to erode the walls of the stomach.

Infection and inflammation usually cause ulcers due to a bacteria called Helicobacter pylori that lives in the stomach. Stomach ulcers can also be caused by the misuse of non-steroidal anti-inflammatory drugs (NSAIDs), which can irritate the stomach lining and impair some of the chemicals in the stomach that would otherwise help repair it. Severe psychological distress can also cause ulcers.

A stomach ulcer is sometimes known as a gastric ulcer. This is just one type of peptic ulcer, with the other type being a duodenal ulcer, which forms in a part of the small intestine called the duodenum. Aside from these, ulcers can also develop in other areas of the body, such as the esophagus. 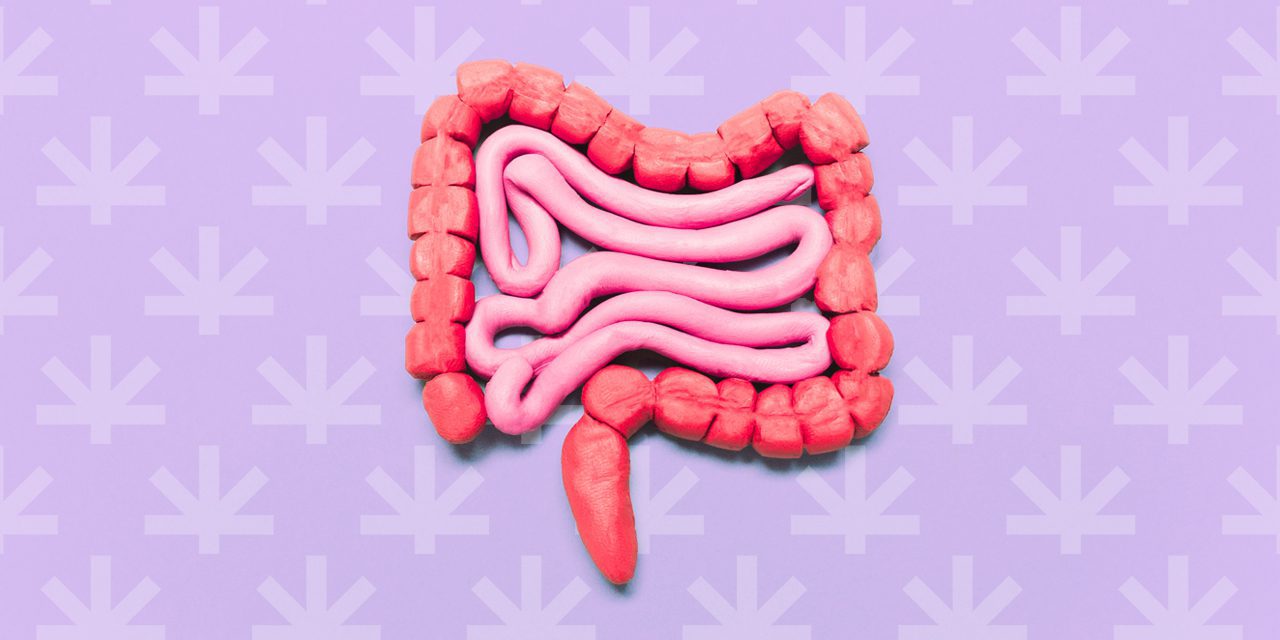 Stomach ulcers can usually be treated with antibiotics and other drugs, including proton pump inhibitors, histamine receptor blockers and antacids. Dietary changes can also help. Sometimes, surgical removal of severe ulcers is required, which could include ulcers that are bleeding, obstructing organs or passageways in the body, or those that have perforated the stomach.

How Marijuana Interacts with the Stomach

Recently, cannabis has shown the potential to treat gastrointestinal problems and disorders, such as abdominal pain and diarrhea associated with conditions like inflammatory bowel disease (Crohn’s, ulcerative colitis).

This is primarily due to the presence of the endocannabinoid system, a signaling network made up of cannabinoids and cannabinoid receptors.

One of the effects of cannabinoid receptor activation is to help with healthy gut functioning. This includes protecting against gastrointestinal conditions like irritable bowel syndrome (IBS) and irritable bowel disease (IBD), as well as gastric acid secretion, gastric emptying, motility-related disorders and relaxation of the esophageal sphincter.

For example, studies in human and experimental animals showed that the stimulation of the CB1 receptor with cannabis extracts containing high amounts of THC inhibits gastric acid secretion.

Cannabis is also known to have anti-inflammatory, vasodilator and antioxidant properties, so it could also exert these effects in the gastric mucosa (the inner lining of the stomach). It may protect the gastric mucosa from drugs like NSAIDs, which are known to be a cause of gastric ulcers.

Conversely, the long-term and chronic use of cannabis could have adverse health outcomes on the stomach. In rare cases, it could cause a condition known as cannabis hyperemesis syndrome (CHS), which is associated with stomach pain, nausea, and vomiting. It is possible that CHS may also play a part in the development of stomach ulcers.

The Connection Between Cannabis and Ulcers

Cannabis use disorders have been found to significantly increase the chance of being hospitalized for peptic ulcer disease by 18 percent. Since this finding involves cannabis use disorders, it could mean this increased risk is only when the cannabis is being misused. Careful dosing could minimize these dangers drastically.

Despite components of cannabis having anti-inflammatory effects, it is thought that it may actually have the potential to increase the risk of inflammation, which could contribute to stomach ulcers. Because cannabis also reduces pain sensitivity due to its analgesic effects, this also could have negative effects as it may mask ongoing inflammation in the stomach, prevent you from seeking traditional treatment, and subsequently lead to worsening or increased presence of stomach ulcers.

Also, since cannabis is believed to provide gastroprotective effects by reducing gastric motility, gastric acid secretion, and relaxing the lower esophageal sphincter, this could play a role in the treatment and healing of gastric ulcers.

More generally, cannabis is used as a pain and nausea reliever, so it could help manage the pain associated with having a gastric ulcer.

Although there is very limited evidence from human-based clinical trials, most of the current research points toward cannabis being a protective agent that could treat and prevent stomach ulcers from developing, rather than directly causing them.

However, users should still take caution, since cannabis may mask the inflammation and pain caused by stomach ulcers, and prevent you from seeking professional help.

Can smoking weed damage your stomach?

Smoking weed does have the potential to damage your stomach, especially for chronic weed smokers. It can cause the rare syndrome CHS. It could also worsen stomach ulcers, as it may mask the pain and inflammation associated with having one, which prevents you from seeking professional help.

Despite the lack of evidence, it is thought that medical marijuana could help treat stomach ulcers. This is because the cannabinoids found within the cannabis plant exert beneficial effects in the body, due to their gastroprotective and anti-inflammatory qualities, their ability to reduce gastric acid motility and secretions, and their ability to relax the lower esophageal sphincter.

Cannabis and Heart Health: At a Glance

There is a lot of mixed evidence when it comes to cannabis, cannabinoids and heart health. Overall, it seems that marijuana use has a complicated relationship…